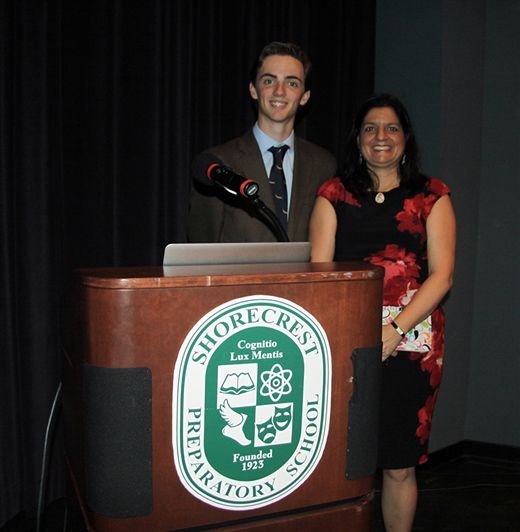 Published on: 10/26/2017
by: Kyle Mullins '18, President of the Honor Council
Journalist Indira Lakshmanan was the first Willis Lecturer in the 2017 series “What’s Fake; What’s Real” for Shorecrest's Upper School. She was introduced to the studnet body earlier this week by Kyle Mullins '18, who said:

"Mrs. Lakshmanan is the Newmark Chair for Journalism Ethics at the Poynter Institute and a Washington, D.C. columnist for the Boston Globe. She specializes in coverage of the State Department, travelling with former Secretaries of State Hillary Clinton and John Kerry to over 80 countries, and has also covered numerous presidential campaigns, both Republican and Democratic. She has interviewed Secretary Clinton over a dozen times for Bloomberg News.
Abroad, she has covered Asia, Latin America, and Bosnia for the Boston Globe, reporting on everything from rebel groups in the Philippines, Nepal, and Colombia to child labor in Bolivia to China’s transition after the death of Deng Xiaoping.
She is a frequent guest host on NPR and other TV and radio programs. She earned degrees from Harvard and Oxford, graduating from the former magna cum laude.
She is truly one of the most accomplished journalists nationwide, and we are extraordinarily lucky to have her here today. In an era in which the integrity and trustworthiness of the press is under suspicion, her experienced voice can provide clarity and perspective."

Watch a video of her presentation here.