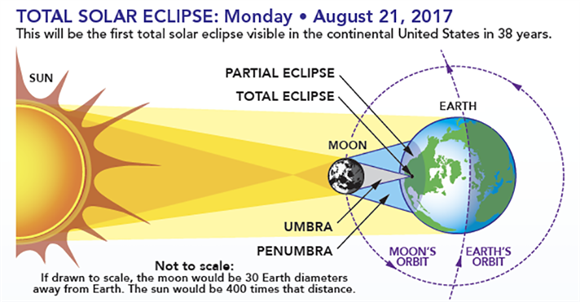 Published on: 8/16/2017
by: Charles Fulco, NASA/AAS 2017 U.S. Solar Eclipse Educator
As a NASA and AAS 2017 U.S. Eclipse Educator, I need to address problems and concerns that teachers across the state have been recently calling to my intention. Over the past couple weeks, I have been receiving calls from instructors from districts around Illinois expressing their frustrations, confusion and disappointment over the actions of boards of education, superintendents, principals and even science coordinators regarding the upcoming solar eclipse on Monday, August 21st. It has reached the point where these teachers’ concerns need to be addressed.

As you are undoubtedly aware, a total solar eclipse will occur in your state on Monday afternoon, something that comes to any given place on average once every 360 years. I have traveled to see four total eclipses on four continents, at great expense and travel time, but each time coming away with an experience that will last my lifetime. On those trips, I taught students (K-12) in countries as diverse as Mexico, Austria, China and Argentina. I visited Argentina again this February to see an annular eclipse, again teaching students eclipse science in preparation for the big event.
As I understand from these teachers, more than a few districts have chosen to remand their teachers and students indoors during the duration of the eclipse. In this age of STEAM, Next Gen Science and Common Core standards, this flies in the face of authentic science instruction and actually reverses the direction of education. This is ironic, considering how much attention and effort has been placed on students (and their teachers) to perform well in the sciences, in an effort to compete on the world stage. As you know, the U.S. is not near the top of the worldwide ladder in science scores.

I understand many districts are afraid of the litigious society in which we live, which hamstrings activities for fear of lawsuits. While I, too have taught in this environment, it has never stopped me, nor my administrators, from providing our students with the educational experiences they deserve, and that includes making certain they observe eclipses where should—outdoors, not kept indoors in a classroom with the blinds closed.

This type of behavior is based on fear of the unknown, adherence to outdated myths and misinformation, and lack of complete information when forming a decision. I blame several parties for this: misinformed newscasters broadcasting misinformation; administrators lacking a true science background; reports of faulty eclipse glasses; and many other factors.

I want to address the most common misconceptions I’ve been hearing:
I owe my science career and love of astronomy in large part to an eclipse I viewed as an 8-1/2 year old. That first eclipse led me to a telescope, which then fostered a lifelong love of science and especially astronomy. I finally saw my first totality in 1991 with my family, and we now are ready to see our third total eclipse together some 26 years later, a sight we await with unabashed enthusiasm. In a world where children are enshrouded in a digital environment where virtual reality rules, how can you in good conscience deny them a chance to see something real that they will remember their entire lives? Who knows if the next Neil deGrasse Tyson would have emerged from this eclipse? Do not deny this opportunity to the children that have been entrusted to you, and do not deny your teachers the opportunity to educate in the least-restrictive environment possible.

My goal for this eclipse is No Child Left Inside. Let’s make this happen all across the U.S. on August 21st!
Sincerely,
Charles Fulco
NASA/AAS 2017 U.S. Solar Eclipse Educator