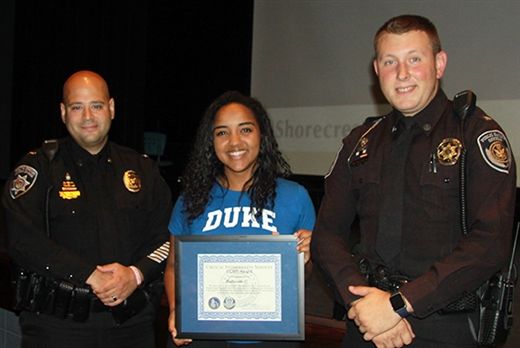 Published on: 5/5/2017
by: Raffi Darrow, Ebytes Editor
Shorecrest and Critical Intervention Services (CIS) maintain a school-wide comprehensive safety, security and protection program that retains the open and welcoming atmosphere of our independent school campus while enhancing all levels of safety for the Shorecrest community. CIS Officers have become an endeared part of the Shorecrest community, participating in celebrations, volunteering at events, and getting to know those who are on campus frequently.
CIS's methodology is based on the belief that strong social networks strengthen communities, by creating an environment where positive influences are nurtured and negative ones are left without hope of success. This is accomplished through “connectors” who take ownership and responsibility for their community as a whole. CIS officers do this in schools and neighborhoods daily, and CIS wanted to recognize that Shorecrest is home to a multitude of student connectors.

This week, CIS presented the Mathew F Little CCBPI Award at Shorecrest. CCBPI stands for Community & Character Based Protection Initiative, and it is presented to a graduating senior who embodies the values of CIS and Shorecrest.
In 2011, CIS lost officer Mathew Little while in the line of duty, after he was shot while patrolling a large apartment complex where police sirens aren't uncommon. Engaged and only 26 years old, Mathew was smart, well liked, and great at his job. He was the first officer to die in the line of duty in the then-19-year history of Critical Intervention Services.
“The recipient of the award should embody character, integrity and true leadership. Please join me in congratulating Multy O. in being the newest recipient of the Mathew F Little CCBPI Award.” Chief Hector Rodriguez said at an Upper School assembly this week.
Congratulations Multy!