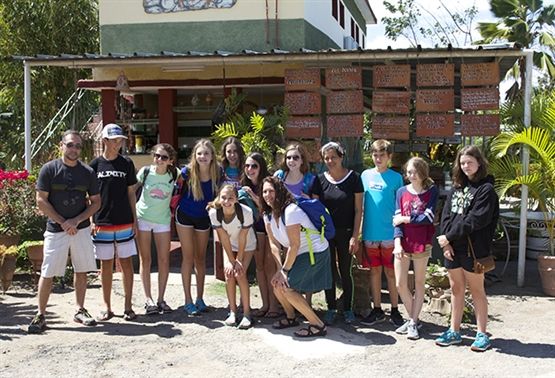 Published on: 5/6/2017
by: Rachel Barrett, Director of Marketing and Communications
Shorecrest Middle School Students Explore Cuba
At 3:15am on Tuesday, March 14th, 10 sleepy eighth graders and two Shorecrest teachers gathered at the Tampa International Airport to check in for a flight to Havana. “It was really early,” recalls eighth grade traveler Gregory G. But when their plane touched down later that same morning, the group was eager to meet their guides and start their 7-day exploration of Cuba.
The March 14-20 trip was a first for many of the students - the first experience with international travel, the first time to Cuba, or the first time practicing their Spanish among native speakers. For faculty chaperones Kris Grant and Steve Dionne, Middle School Spanish and History teachers, respectively, the spring trip was their second time taking students to Cuba.

"We took a group of students last summer," says Grant. “The students had such a great time and learned so much, we wanted more students to have the opportunity so we added a spring trip.”
The 7-day trip began and ended in Havana, where the group went sightseeing, tried authentic Cuban food, and visited attractions including La Maqueta de la Habana, a detailed miniature model of the old city, and Morro Castle, a 17th Century fortress. As they rode, walked, and explored, the group’s local guides shared history and points of interest.
Throughout the week the students enjoyed trips to Pinar del Rio, touring the extensive cave system of Gran Caverna de Santo Tomás. They learned about the life of local fishermen at Cienaga de Zapata Nature Reserve, in Playa Larga, explored Trinidad, a Unesco World Heritage Site, and toured Che Guevara’s Mausoleum in Santa Clara. The Shorecrest contingent also enjoyed meeting some of their Cuban counterparts in Matanzas National School of Art, a premier arts school for top students studying fine arts, dance, theatre, and music. Along with art, history, and culture, the Chargers spent some of their time in service with Murealando, a community art project in Havana.
“My favorite part was walking around Havana and going to the cave,” continues Gregory. “I also really liked the cars. It’s cool that they’re all from before the revolution because after that is when the trade embargo started. They’re all Chevys and Fords.” Gregory and his classmates can speak knowledgeably about Cuban history from their experience in their eighth grade history and Spanish classes.
“We’ve done three projects about Cuba this year, studying the periods pre-, during, and post-revolution. The students have presented on history, culture, government, economics, varied perspectives, and more,” shares Grant. Eighth graders are currently working on a final projects on problems facing Cuba. Each student chooses a problem, researches and explains its origin and background, and develops a proposed solution. For Gregory, that problem is transportation.
“Transportation seemed really bad for the local people there. There were really long lines for the buses, the railroads take forever to go to and from the other side. I think that they should have more buses and a better train system for the locals, and that would help with tourism too." The students will present their projects the first week of May.
“Our group had a wonderful time together. The students were so curious about the people, history, and culture of Cuba,” says Kris Grant. “The trip really sparked their interest in our projects even more, and they brought that enthusiasm and knowledge back to their whole class at Shorecrest. I'm eager to see how their new perspectives influence their Cuba projects.”