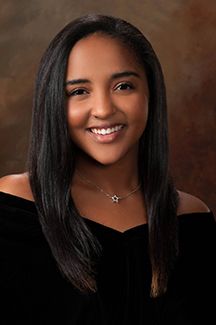 Published on: 3/2/2017
by: Divya Kumar, Times Staff Writer
One young woman lost both parents at the age of 7. Another was the daughter of a drug addict. An immigrant from Vietnam juggled learning English while taking care of her autistic sibling. And another student faced the daily battle of preserving her Ethiopian identity that was not always welcomed.

The four were named recipients of the 2017 Barnes Scholarship, an annual award sponsored by the Tampa Bay Times Fund named after Andrew Barnes, the former chairman and CEO of the newspaper's parent company, Times Publishing Co. The award, granted to high school seniors who have overcome significant adversity and achieved excellence, is worth up to $60,000 to pay for four years at an accredited college or university.

The winners will be recognized at a luncheon in April.
Here is Shorecrest senior and Scholarship Recipient Multazem O.'s story:

Multazem O. grew up creating her own sense of identity.

She looks like many African-American girls, she wrote, and she doesn't have an accent, but being Ethiopian is a large part of who she is that is often erased from the way the world sees her.

"Even my name has been stripped of its Ethiopianness because no one can pronounce it," Multazem, who goes by "Multy," wrote in her essay.

Multy is co-president of the multicultural club and vice president of Student Council at Shorecrest Preparatory School in St. Petersburg, in addition to being involved with several other extracurricular activities and volunteering with Habitat for Humanity, CASA and other organizations. She has a GPA of 4.87 and said she seeks much of her strength from her mother, who was born in Addis Ababa.

"With all of the racism in the media it can be hard to be proud of who I am because some see me as a target for hateful comments," she wrote. "It's disappointing my parents still have to caution my brother against walking around our neighborhood alone, and that they have to make sure we agree with all law enforcement at all times just to be safe. So although it has been difficult to be surrounded by persistent hatred, I find strength in who I am and how I've been raised to guide me down the right path."

Multy will attend Duke University where she will start on a prelaw track. She said she wants to focus on civil law and defending the rights of all people.
Full Story: http://www.tampabay.com/news/education/four-students-named-as-2017-barnes-scholarship-winners/2314421