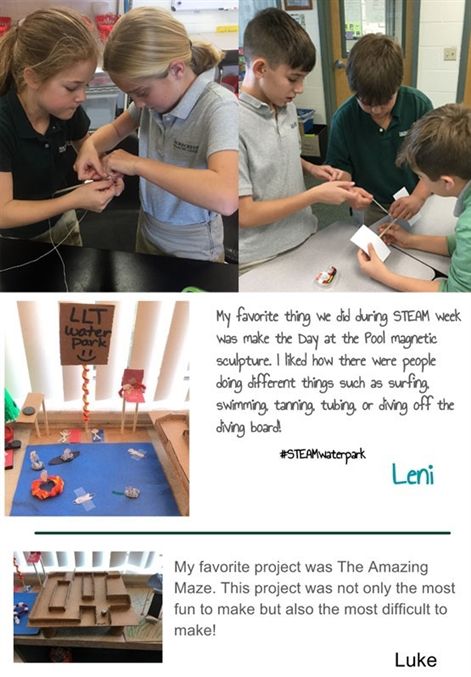 Fifth graders in Middle School at Shorecrest Preparatory School spent a week integrating science, technology, engineering, art and math during Drop Everything and STEAM Week. The week focused on students collaborating to solve science- and art-based challenges that mimic the structure and work of STEAM professionals in the real world. Researchers have found that playing with ideas increases learning and is important for effective thought. This dedicated time for play and exploration nurtures creativity, which is critical to developing problem solving skills.
The theme for the integrative week was Designing Kinetic Sculptures. Students were separated into three classrooms, and from there broken into six teams per room. An early introduction covered what makes a sculpture, expectations for the week - and then almost immediately discussions turned to scientific properties such as force and balance, and students jumped into design-thinking and collaboration.
Teams used spinning, dangling mobiles to explore center of mass, energy, balance and force. They heard about Alexander “Sandy” Calder, an American artist born in 1898. He designed toys, tapestries and sculptures as well as other forms of art. He has been referred to as the Father of Mobiles. When they created their own symmetrical and asymmetrical mobiles, students were reminded to wear both a "scientific hat" and an "artistic hat." Using interdisciplinary approaches forced students to access their perceived strengths and weaknesses, and those of their teammates.
Day two covered the topics of potential energy, kinetic energy, gravity and friction using marbles. The artist they learned about for these subjects was George Rhoads, who uses marbles in kinetic sculptures. Teams then made marble runs that met certain criteria, including being able to push a cup at the finish. The team that used a marble to push a cup the furthest won the Marble Run Olympics.
Students were then introduced to Israeli artist Eyal Gever, who uses graphic design to create computer models of natural and imagined disasters, and then prints the results as 3D sculptures. After viewing works from his “Collisions” series, replicating boxes that had been smashed together and crushed like the front of a vehicle in an accident, students made their own crushable sculptures. They used Newton’s Third Law and variables such as size, shape, mass and speed. When viewing each other's sculptures they were prompted with questions like: Which sculptures interested you? What factors influenced how your objects moved or reacted? How does this method for creating sculptures illustrate Newton’s Third Law?
Day three added engineering to the design process. Engineering designs often solve a problem or meet a need, so it was prime time for students to use design thinking and creativity! They learned about Anne Lilly, a kinetic sculptor who uses a lot of movement in her work. Students played with ways they could use gears to create movement in sculptures. This led to exploring cams and automata.
On day four, students were introduced to the French artist (and former software programmer) Laurent Debraux who uses magnets in his kinetic sculptures. The accompanying challenge had students using their prior knowledge of magnetic forces to add movement to a design.
In between each activity, students took a "gallery walk." They moved thoughtfully through each room to see what other teams had designed. Examining others' work gives students a chance to learn from each other - about efficiency, what's visually appealing and more. On the final day of STEAM Week, parents were invited to a Gallery Walk to view projects students selected as their favorites.
Fifth grade English teacher, Tedra Tatelbaum, summed up the first day of STEAM week saying, "I was so proud of our fifth graders today. I NEVER heard, ‘I can't do this!’ or ‘Why are we doing this?’ or ‘This is too hard.’ Not once. They started off STEAM Week with a growth mindset, and teaching was super fun. With adequate training, planning, collaborating, supplies and open-minded students who WANT to be challenged, anything is truly possible. Our 50 kids want to Be More! Great job, fifth grade!"
STEAM week lets students try new strategies, improve from their own effort and discover skills they may not have known they had. It also allows the children to connect with whatever strategy works best for their style of learning. Students learn to observe, visualize, manipulate, play and develop the creative confidence to continue through trial and error and imagine new possibilities.
A Lettin' Off A Little S.T.E.A.M Summer Program will be available at Shorecrest for Middle School students focused on engineering prosthetics. This program uses the same model, but facilitates the process of engineering prosthetics for animals. The week includes a trip to The Clearwater Marine Aquarium to learn about Winter’s prosthetic dolphin tail and professional Guest Speakers.

Find photos from the week here.