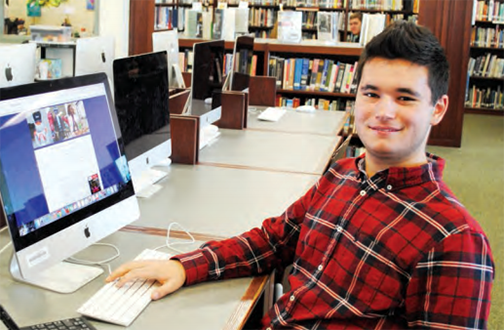 Published on: 4/5/2016
by: Raffi Darrow, Ebytes Editor
In the summer of 2015, Carter V ’17 was selected to spend four weeks at the Rehabilitation Robotic Research and Design Laboratory, located at the new Pennsylvania Institute of Rehabilitation Medicine at the University of Pennsylvania School of Medicine. Run by Dr. Michelle Johnson, the lab focuses on robot-mediated rehabilitation, specifically using robotics to understand arm dysfunction and recovery after a brain injury or stroke.

Carter joined the ranks of college undergrads and graduate students. “At first I thought the other internship applicants were superhuman. They would all be valedictorians here at Shorecrest, and that intimidated me,” admitted Carter, “But I had taken my first computer science class last year [at Shorecrest], and as part of the class we had to construct competition robots. They weren’t very high quality, but it gave me the mindset of assembling robots for various tasks.”

When he first arrived at the lab, Carter had to be certified in CITI and HIPAA, to be sure his ethics were compliant with regulations. In addition, Carter trained early on with the UPenn IT department to learn how to use their proprietary web software to update the lab’s website. “They had an old website built on Wordpress that nobody was happy with. The new site I built sits on the school’s main domain.” In this way, it seamlessly integrates with the rest of the University’s website.

He describes the lab as a busy learning environment with about 10 other interns. “I had to read through many research articles my first three days to get a sense of what the lab was doing. It wasn’t too fun, but my ability to read scholarly articles thanks to AP History class came in handy.”

Dr. Johnson was finalizing a TEDxPhiladelphia talk and wanted to demonstrate some of their robots. The lab had a robot that rolled on wheels and another that could interact with people, and she wanted both to make an appearance on stage. Carter was part of a team that was able to incorporate the two robots so that the talking robot, “Flo”, could ride the other onstage at the end of the TED Talk and tell a joke to the audience.

Although Carter didn’t have interaction with end users of the medical robotics being developed in the lab, other teammates did, and they were on a tight deadline to finish a project that would ship to Mexico at the end of his third week. This week was spent in an all-hands-on-deck atmosphere with the rest of the whole team focused on this project, occasionally pulling all-nighters.

“The other interns were a lot of fun, but people were pulling multiple all-nighters. Sometimes my job was to make sure they woke up from their naps on time,” Carter joked. “I was actually in charge of soldering some of the circuits, putting together the final assembly, and then helping one of the other interns (a Masters student) write an instruction manual to help their contacts in Mexico put it together once it got there.”

Carter’s final week was spent with a 3- D printer. He had some experience with this, thanks to the Shorecrest Makerspace. This is when he had the opportunity to focus on the lab’s primary goal, building affordable robots to help stroke patients. Their framework was based on Theradrive software that lets stroke patients exercise limbs that were impaired, while playing a video game.

“There’s a variable assist crank lever, and the patient sits in front of a monitor and the lever is like their controller for the video game,” Carter explained. “I had to design a piece and print it as a plastic unit that would keep the motor supported within a larger mount.” Because his piece was being added to a larger assembly, it had to fit just right. “It took me three tries to get the measurements right using Solidworks software and a 3-D printer.”

“From a parent perspective,” says his mom, Beth Vivio, “I think the best part was that Carter got a taste of college / work life away from Mom and Dad, in a safe, controlled environment.”

Carter ads: “I feel like Shorecrest supported me through my computer science class and also the VEX Robotics Team, and my knowledge in programming which came from both. This internship has gotten me really interested in the fields of bioengineering and biomedical engineering. Everything I was doing was very robotic and mechanical, but it also had a human side to it with understanding what stroke patients go through and how we can build these machines to help them.”

Excerpted from the Winter 2016 edition of "Shorecrest Magazine". View the full magazine here.

Do you have a similar story to share? Send your story and photos to ebytes@shorecrest.org for a chance to be featured in Shorecrest publications!