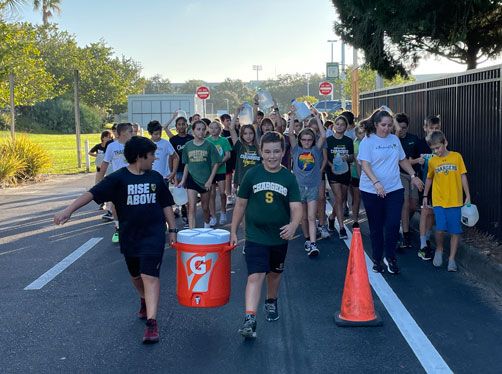 Published on: 11/10/2022
by: Sandy Janack, Fifth Grade Social Studies Teacher
Fifth graders are learning about the many women and girls in South Sudan who have limited education and job opportunities because of a lack of clean, running water in their communities. They have been reading “A Long Walk to Water” by Linda Sue Park in English class. The book’s main character, Nya, is a girl who must trek daily to collect water for her family’s survival. The other main character, Salva Dut, is one of the Lost Boys of Sudan who escaped the massacre in his South Sudanese village as a boy. He became a refugee for over a decade in Ethiopia and later Kenya.
To symbolize Nya’s walk, fifth graders embarked on a Long Walk with Water around campus. While Chargers carried a gallon weighing about 8 pounds, they marveled that girls in Nya’s situation routinely carry a container weighing about 40 pounds. Students gained empathy with Nya as they walked. “At least we have shoes on and thorns aren’t poking us!” one fifth grader remarked, recalling a detail from Nya’s story. Later in the walk Cali F. ‘30 was so grateful for the running water she had in her life, at school and at home.
This was a truly cross-curricular unit for fifth graders. Students have been learning about Africa in Social Studies, focusing on how humans adapt to the many challenging environments there. Students are also reading and analyzing nonfiction texts that build understanding of water scarcity issues that exist in the world. In Math, students measured the weight of a gallon of water and compared it to the weight of the water Nya carried in the containers used frequently by women and girls in South Sudan. In addition, they used math and social studies map skills to determine the distance Salva walked (over 800 miles!) and calculated his rate of speed.
In Science, students have been researching waterborne illnesses and water filtration systems. Students created their own water filters, by choosing items such as cotton balls, gravel, sand, coffee filters and other items they thought would filter dirty water the best. Groups of students competed to see which water was the cleanest after filtration.
Students expanded their technology skills by creating graphic novels using the Book Creator app. They used photos from the Long Walk experience and added text, titles, captions, and other features to reflect on their journey around campus.
This experience, paired with the fifth graders’ study of the United Nations Sustainable Development Goals and Salva Dut’s organization Water for South Sudan, opened the students’ eyes to water quality issues that exist in the world. They gained both empathy and an appreciation for the many organizations that are making a difference in this area of the world.