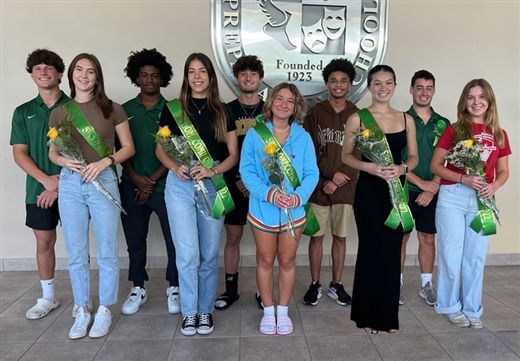 Published on: 10/27/2022
by: Raffi Darrow, Ebytes Editor
On Friday, October 14, the 2022 Homecoming Court was announced during an Upper School assembly. The Homecoming Court is selected by the senior class. The Homecoming Queen and Mr. Spirit will be chosen from the Court by the US student body and announced at the Homecoming Football game (more details below).
Congratulations to the following members of the Class of 2023 (pictured):
(back row) Enzo Pagano, Aneko Jackson, Drew Bunn, Jaylon Coad and Chase Waitz-Miller
(front row) Lily Tomey, Ana Domenici, Ainsley Burke, Lillee Burkett, Rose Leary
Download a photo here.
Get to know the members of the 2022 Homecoming Court:

Ainsley Burke
Ainsley has attended Shorecrest her entire life. She is a Swim Team Captain and President of the Little Free Library Club. Ainsley has served on the Honor Council since sophomore year, and is also involved in the Global Scholars Initiative and Model United Nations. After college, she plans to attend law school and ultimately work for UNESCO or the UN.

Lillee Burkett
Lillee is the Co-President of both the Asian Student Union and the Shorecrest Community Arts Club, as well as Captain of the Varsity Volleyball and Varsity Softball teams. She is a member of the National Honors Society and the National Art Honors Society, as well as a member, volunteer, and grade-level representative for The Kind Mouse Club and the Head of Social Media for the Digital Media Club. She has also received honors for her visual artwork. She enjoys coaching middle schoolers at the Shorecrest Volleyball Summer Camp.

Ana Domenici
Ana is originally from Brazil and has attended Shorecrest for her junior and senior years. Ana shared, “Since my first day at Shorecrest, I realized the beauty of how people with different cultures, backgrounds, and mentalities can contribute to a better and more united community.” She is a member of the varsity cheer and track teams, and participates in various clubs including Pre-Med, Kind Mouse, and the Spanish Club. She serves as the Vice President of the STEAM for Girls Club. She intends to pursue her passion in the medical field post-graduation.

Rose Leary
Rose has been at Shorecrest for 11 years and is so sad to be leaving upon graduation! She is currently President of Student Council after having been a member since her freshman year. Rose is also the President of Guardian ad Litem Club, Co-President of Model UN, and Vice President of Mental Health Matters club. She has been swimming since third grade, swimming for Shorecrest since sixth grade, and is a Captain of the Swimming and Diving team this year. She plans to study Psychology and Criminal Justice, and hopefully go on to law school.
Lily Tomey
Lily joined the Shorecrest community her freshman year. She is involved in many activities at Shorecrest, including: Captain of the Varsity Cheerleading team, Co-founder and President of Charge Up, Secretary of Mental Health Club, member of Guardian ad Litem, along with volunteer work.
Drew Bunn
Drew has attended Shorecrest for the past 9 years. He is the Captain/Quarterback of the Chargers Varsity Football team. Drew has loved every second of his high school experience. Fun facts about Drew are that he lived in Boston for the first 9 years of his life and has 50+ cousins.

Jaylon Coad
Jaylon serves as Vice President of the Honor Council, a member of the National Honor Society, founder and president of the Chess Club, and a writer for "The Chronicle" newspaper. In freshman year he won the award for Outstanding Citizen and recently won the Core Values Award for Respect. Jaylon has volunteered with The Kind Mouse frequently because he loves their mission of giving food to children who suffer from chronic hunger. Jaylon says, “I would love to be Homecoming King of the 2023 senior class!”

Aneko Jackson
Neko has participated in Shorecrest Chargers athletics throughout his high school career. He also serves as a member of Student Council. Neko says, “I have held myself accountable to be the best version of myself I could be and try to help others whenever possible. I’ve enjoyed my time playing football, which is my break from everything. I’m grateful for my place in this community as I exceed limits every single day.”
Enzo Pagano
Enzo joined the Shorecrest community in third grade. He is a member of the Varsity Football team, Student Council, Spanish Club, Key Club and Yoga Club. Additionally, he is an inductee of the National Honor Society and recognized as a National Merit Commended Scholar. Outside of school, Enzo has a job at the UPS Store and in his free time enjoys hanging out with his friends.
Chase Waitz-Miller
Chase shares, “Throughout my time at Shorecrest, I strive not only to achieve individually, but also to be a supportive teammate on the field, and a friend in the classroom.” Chase has been part of the Football and Track Chargers for over 7 years. He is a leader in the Makerspace Steam Club and involved in the Key Club, Digital Media Club, Community Arts Club, Kind Mouse Club, and National Arts Society. Chase is an advocate for the arts, encouraging others to express their artistic abilities.

During Homecoming Week, Upper School students participate in themed, judged costume days. [Photos - thank you to our volunteer student/parent photographers!] Each grade will also design a felt banner to be hung in the Rec Gym and judged.
On Thursday, the four Upper School grades will compete against each other in a variety of athletic and trivia competitions. This “Class Color Competition” will be supported school-wide this year, as each grade is invited to dress in their class color. [Photos] 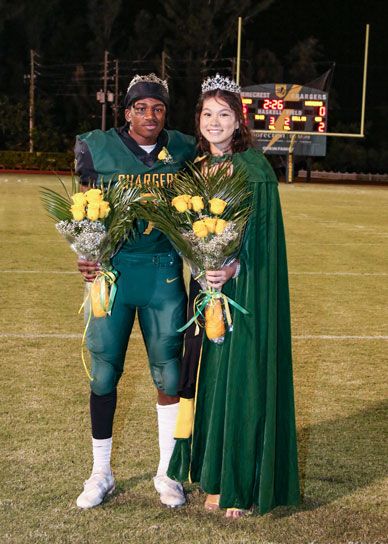 More photos to come next week!

After an alumni tailgate Friday evening, kickoff for the Homecoming football game was at 7pm. Read a recap of the game here.

[Photos of senior night, crowning and the football game thanks to volunteer parent Elise Elsberry]
The festivities continued on Saturday with a Homecoming Dance for all Upper School students and an all-alumni reunion at Grand Central Brewhouse.