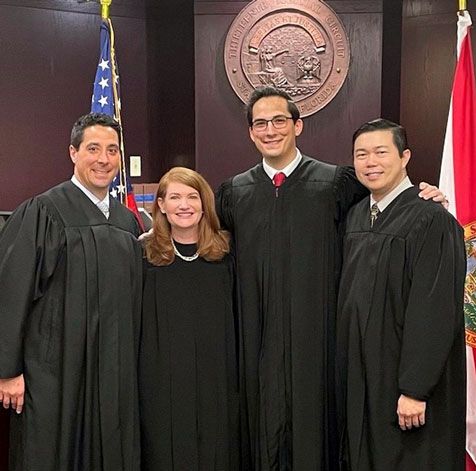 Published on: 10/13/2022
by: Raffi Darrow, Ebytes Editor
On Wednesday, October 12, 2022, Michael J. Hooi ‘02 (pictured, right), a Hillsborough County judge, gathered with the three other County Court Judges of the Thirteenth Judicial Circuit of Florida to commemorate their appointments and celebrated Constitution Day 2022.
Before becoming a judge, Hooi practiced at Stichter, Riedel, Blain & Postler, P.A., in Tampa, Florida, where he handled both litigation and transactions. While in private practice, he was recognized in multiple years by Super Lawyers as a Rising Star, by Best Lawyers as a One to Watch, and by the Florida Supreme Court for exceptional pro bono service.
Judge Hooi began his legal career as a law clerk at the U.S. Court of Appeals for the Eleventh Circuit for Judge Charles R. Wilson immediately following graduation from the University of Florida. While in law school, Judge Hooi was a managing editor of the Florida Law Review, a research assistant for a notable criminal-procedure treatise, and a teaching assistant for courses in business law, legal research and writing, and appellate advocacy. He also received the Gertrude Brick Award from the law review and interned for Judge Elizabeth A. Kovachevich at the U.S. District Court for the Middle District of Florida. He majored in philosophy at Vanderbilt University, where he was an Arts & Science College Scholar.
Judge Hooi is a descendant of Chinese immigrants. His paternal grandfather emigrated with his family from China and served in the U.S. Army during World War II. His mother is a naturalized Chinese-American citizen from Indonesia.
When he is off the bench, Judge Hooi enjoys writing, speaking, and serving the community in legal and nonlegal matters alike. He also volunteers at nonprofit organizations and his church.