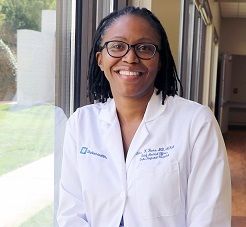 Published on: 9/22/2022
by: Liz Switzer, Duke University
It all started with ice cream; an especially tempting and refreshing treat on a hot, Florida day when you’re four.

But the simple joys of childhood—having an ice cream, playing with friends in her parent’s grassy yard in St. Petersburg, just being a normal kid—were not always options for Adia Ross MD, MHA, chief medical officer of Duke Regional Hospital (DRH) and assistant professor of General Internal Medicine. As a small child, she suffered from severe asthma. It was so bad, in fact, that her pediatric immunologist wondered if she would even make it past childhood.

But that all changed when Ross came under the care of St. Petersburg allergist, Stephen Klemawesch, MD, a fellow in allergy and immunology at Duke University Medical Center in the early 1980s. Little did Ross know at the time that Duke Health would come to play such a major role in her life, but a seed was planted: Ross began dreaming about becoming a doctor like Klemawesch.

“My mother remembers me saying, ‘I feel so much better! I want to do that for other little children. I want to be a doctor and make them feel better,’” Ross says, “She was like, ‘Oh, my gosh! A four-year-old said that!’”

Ross is the first doctor in her family, whom she describes as civic-minded caregivers that fed her dream of becoming a physician with can-do encouragement and the expectation that she would choose a course in life to help make the world a better place.

Adia Ross is doing just that.

Read the rest of the inspiring article on Duke's website here: https://medicine.duke.edu/news/trailblazer-adia-ross-md-transformational-leadership-dash-good-trouble