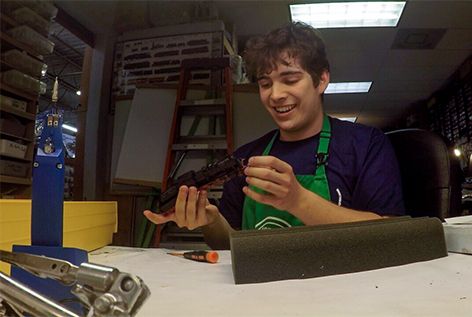 Published on: 6/13/2022
by: Matthew Apthorp, ABC Action News
In Pinellas Park, there’s an age-old business that not only survived the pandemic but grew stronger because of it.

Like the real-life steel titans, their models are made to replicate, which doesn’t look like it’s going to change anytime soon.
HR Trains and Toys has been supplying model train owners with everything they need to make their railroad dreams come true for 45 years. They sell all types of model trains, all the fixings that make those sets come to life, and repair models for customers.

They’re also in the business of making dreams come true for people of all ages.

“We facilitate people in a hobby that is probably one of the oldest hobbies around,” Dennis Hoffman, owner, operator, and train enthusiast told me.
...

Dennis is the conductor here, but he admits he’s not the most knowledgeable person at the store, and that’s when I met his engineer.

Working away in a workshop in the back of the store, I met Marco Camuzzi (Shorecrest Class of 2023). On this day it was his birthday. He’s 18 years old.

Marco started here as a customer and now for the past year has been Hoffman’s right-hand man, repairing models for customers, stocking shelves, and helping customers pick out the right train.

Today he was repairing a train’s electrical that shorted out after the owner accidentally put the wrong component in to make the smoke stack work. He was also supplying me with a history lesson.
Like Dennis, it’s in his blood.

“My Uncle had model trains. He built a table. He built a table for my cousin. When he grew out of it, I got all the stuff. My grandmother’s father was a conductor for the railroad in Cuba,” Marco Camuzzi said has repaired a customer's train.

Model railroading isn’t Marco’s only thing though. He’s been singing and playing the violin since he was eight and also does musical theatre.
“I’m the kid that wants to sing and act for a living but does model trains on the side,” Marco said with a smile.

Even if he doesn’t stick to model trains as a career choice, Dennis is grateful to have such an enthusiastic person helping guide the store for a new generation.
“He’s a go-to person if you want to know something about European trains, digital, and American trains. He just knows everything,” Dennis said.

He knows it so well that he successfully fixed the train he was working on while we were talking.

His excitement for this is contagious. So contagious that I went searching for my grandfather’s railroad car and actually found it.

From the realism of these models to the technical skills they require to keep up, there’s no denying they’re doing much more than just playing with trains at HR Trains and Toys.

“I just love it and when you love something as much as this you just learn as much as you can about it,” Marco said.
Read the full story at: https://www.abcactionnews.com/news/local-news/floridas-largest-model-train-store-keeps-the-hobby-moving-through-generations