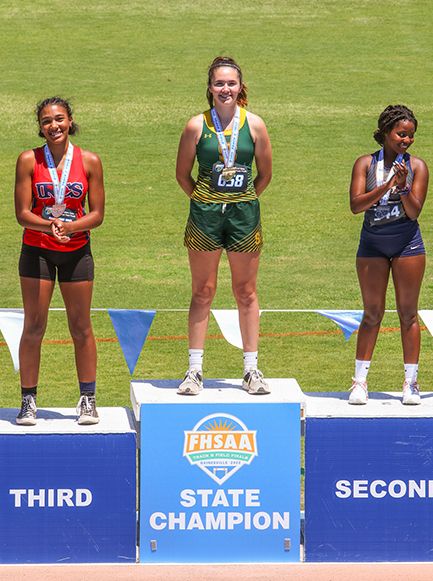 Published on: 6/7/2022
by: Rachel Barrett, Director of Marketing and Communications
After winning the Florida State Championship Title in javelin throwing for two consecutive years, Shorecrest Chargers athlete Sonoma Kasica ‘24 was invited to compete at the Nike Outdoor National Track Meet in Eugene, Oregon, on June 18. The Girls Championship Event was on Hayward Field at the University of Oregon in Eugene.
Sonoma began throwing javelin as a freshman in high school and won the state championship her first year in the sport. Her 41.61 meter javelin throw at the 2022 Florida State Meet at UF qualified her for the Nike Outdoor National track meet. She competed against some of the nation's best at this unique opportunity to throw at the same site as the US Olympic Trials and NCAA track and field championships.

Sonoma placed 13th in the Championship Competition and 8th in the Showcase. See a video clip from her 40.03 throw on Instagram.

After the experience she said, "I loved being able to compete against the best of the best, and being able to do it at the historic Hayward Field made the experience even better!"
A multi-sport athlete, Sonoma is the goal keeper for Shorecrest Chargers Girls Varsity Soccer team, who made it to the State Finals in 2022. She also plays on a competitive Tampa Bay United club soccer team.