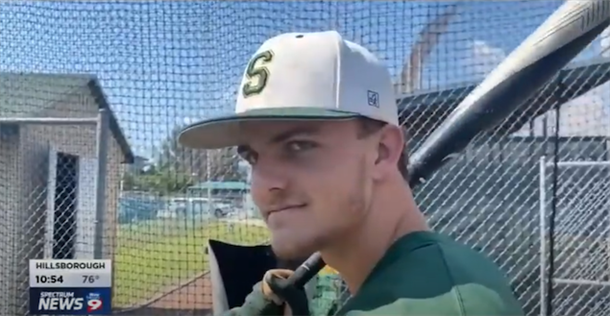 Athlete of the Week: Shorecrest's JC Barrott leads by example

Published on: 6/3/2022
by: Olivia Stacey, Bay News 9
In baseball and in life, sometimes you have to fail to succeed. It’s a lesson JC Barrott '22 knows well.

"Baseball is a game of failure, so it’s really a life lesson that you have to keep failing at life in order to succeed,” Barrott said.

The Shorecrest Prep senior has had his share of strikeouts, but now, he’s a home-run hitter. With a .514 batting average, his statistics speak for themselves.

Head coach Mark Persails has seen Barrott’s growth over the past few years.
"Watching him from where he was as a sophomore to where he is now, he’s turned himself into a hitting machine,” Persails said. "Arguably one of the top hitters in Pinellas County."

Barrott has developed into a true team leader.
"Watching him this year play with a bunch of freshman, he had an eighth grader behind the plate, freshman all over the infield, to watch him lead those guys by example was tremendous,” Persails explained. "He’s not a ra-ra cheerleader type of guy, but when he does talk, all those little guys listen.”

One of those players is eighth grader Paul Overstreet. He says JC helped him on the field and in the classroom because of the standard he set.

"Seeing him every day before practice, he works without anybody seeing," Overstreet said.

Barrott’s work ethic is second to none.

"The consistency of his work ethic is so great, when you’re as consistent as he is being the first one there, last one to leave, show up to workouts every morning, the leadoff hitter, everything that goes into that, and rallying around the guys when they’re not having a good day. Just the consistency of that over the years, you get a lot of respect from both upperclassmen and lower classmen and everyone you come in contact with," Persails said.

His leadership is something that will serve him well as he sets his sights on his future playing for Florida Southern.