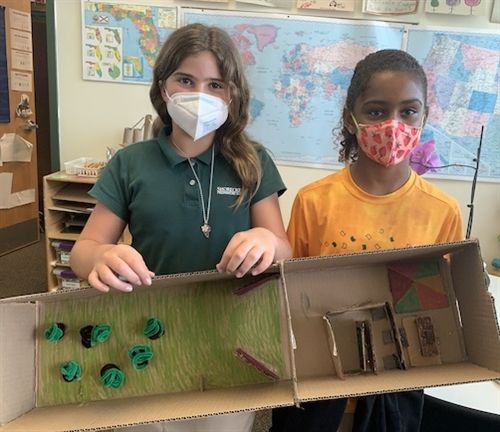 Saving the Planet, One Project at a Time [Video]

Published on: 2/24/2022
by: Meric Weinkle, Fourth Grade Teacher
Fourth graders in Mrs. Weinkle’s class recently presented projects representing their learning from a science unit on Sustainability. The study included investigating deforestation, single-use plastic consumption and landfills, water pollution, soil contamination, and air pollution. Students selected one of the aforementioned areas to research further. From there, they selected a category that inspired them most: innovator, engineer, or changemaker (or a mix of two or three). Finally, they created a project based on being an innovator, engineer or changemaker along with a presentation that included the sustainability-related problem they wanted to solve, the solution they planned, a prototype if applicable, and a visual representation of their ideas.
Students Mari E. and Liora P. researched deforestation. “Deforestation is where people are thinning out forests or when people are removing land. This means they are taking away animal’s habitats,” Liora explained. They made a model of a museum that would educate people on the problems associated with deforestation along with tips for decreasing global warming. “The museum should be on the border of a city,” Mari suggested. Instead of a gift shop the museum would have an area to buy a tree to plant, or to be planted by museum staff in honor/recognition of someone.
Steele G. and Addy F. researched what happens when oil and plastic enter our waterways and oceans. They created a model of a machine they ideated to clean oil and plastics from water. “Most people say you just put soap in the ocean [to clean an oil spill] and it goes away,” Addy read from her project board. “Sorry to say they are very wrong. If you put soap in the ocean it takes it to the land, so the oil doesn’t just hit sea animals it also hits land animals.”
“Plastic pollution has a solution!” Steele exclaimed. “You can join or start a community clean up, you can go on walks around your neighborhood and pick up what you see. Try to convince people to stop throwing trash away to be recycled.”
The fourth grade sustainability unit is an example of project-based learning at Shorecrest. Students inquire, research, and display what they have learned with a project. "Project-based learning is focused on teaching by engaging students in investigation. Within this framework, students pursue solutions to nontrivial problems by asking and refining questions, debating ideas, making predictions, designing plans and/or experiments, collecting and analyzing data, drawing conclusions, communicating their ideas and findings to others, asking new questions, and creating artifacts (e.g., a model, a report, a videotape, or a computer program)." --Phyllis P. Blumenfeld and others, "Motivating Project-Based Learning: Sustaining the Doing, Supporting the Learning," Educational Psychologist magazine
View two project shares from fourth graders in the following video: