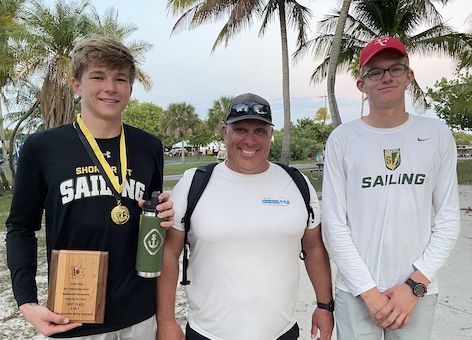 Published on: 1/13/2022
by: Shorecrest Parent
The fall high school sailing season culminated in national championships in two events - the single-handed class and the keel boat class - and the Chargers qualified to compete in both.
Single-handed Championship: Co-captain Guthrie Braun '22 brings home national title!
Shorecrest was the only school in the country with two sailors who qualified for the single-handed national championship. Co-captains Guthrie Braun ’22 and Ethan Danielson ’22 traveled to Miami on December 18-19 to compete against 16 other Laser sailors from across the country. Over the course of a 15-race regatta, Braun accumulated 11 first place finishes, totally dominating the field to win the Cressy Cup!  Danielson finished fourth, with second place going to St. Ignatius (Illinois) and third to Seattle Prep (Washington).
The Shorecrest sailors credited Coach Todd Fedyszyn for their success in this highly competitive event.
Keel Boat Championship
The Chargers also qualified for the Keel Boat National Championship. On the weekend of December 11-12, the top ten high school sailing teams from across the country gathered at the St. Petersburg Yacht Club. The J70 sailboat used in this event requires a team of four sailors, and Shorecrest Chargers Guthrie Braun ‘22, Ethan Danielson ‘22, Andrew Tang ‘22, and Kate Danielson ‘24 were on the water having qualified to represent the Southeastern United States Region in this regatta.
The first day of racing was delayed until the afternoon breeze filled in, and the competitors enjoyed steady, moderate sailing conditions. The Chargers took a second and a first in the initial two races jumping out to an early lead. However, the other teams surged in the races three and four. Shorecrest won the fifth race to finish the first day of regatta in second place overall.
The second and final day of the championship saw fog on Tampa Bay, and it looked like no sailing would be possible. As the day wore on, the wind increased just enough to allow a single race, giving Shorecrest one last chance at the national title. The Chargers went for broke with their tactics and were in position to win the event until a wind shift in the final 100 meters before the finish line dashed their hopes.
Lake Travis High School from Texas came away as the national keel boat champions. Second and third places went to St. George’s School from Rhode Island and the Christchurch School from Maryland, respectively. Shorecrest finished fourth. These top four schools were separated by only one point in the overall scoring, reflecting an incredibly close regatta.
With the close of an excellent fall season, the Sailing Chargers are looking forward to the winter and spring, during which they will continue to compete in double-handed racing (two-person boats) hoping to qualify for yet another national championship in June!