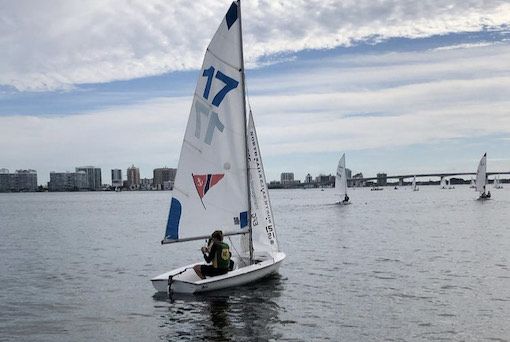 Published on: 11/17/2021
by: Kate Danielson '24
In its third 420 regatta of the season, the Shorecrest Chargers Varsity Sailing team faced light winds, intermittent rain and tough competition to ultimately finish 3rd out of 22 teams in this ten-race event.

Skippering duties in the A division fell to co-captain Guthrie Braun ’22. Rosie Simpson '25, joining the squad after freshly returning from racing Optimus sailboats in France as a member of the US National Optimist Sailing Team, served as crew and in her first appearance as a Chargers sailor won one of the races.

Co-captain Ethan Danielson ’22 skippered in the B division where crewing duties were split between Bella Testa ’23 and Kate Danielson ’24.

The 420 class sailboat season will continue until late spring. The Chargers are currently third in the district standings and remain well-positioned to advance to the district championship. The next 420 regatta will be South Points #4 hosted in January by the Ransom Everglades School.

In addition, the team’s fall season is still not over. Shorecrest sailors will be competing in the high school National Championship in two events! Guthrie Braun '22, Ethan Danielson '22, Kate Danielson '24 and Andrew Tang ’22 comprise the team that will race for the Mendelblatt Trophy in the Keelboat Nationals hosted by the St. Petersburg Yacht Club on December 11-12. Much of the action can be viewed from the St. Pier, so spectators are welcome.

Then, on December 18-19, Guthrie Braun '22 and Ethan Danielson '22 will both compete for the coveted Cressy Cup, the award given to the top high school sailor in the single-handed Laser class. Shorecrest is the only school in the country to have two sailors qualify for this prestigious event, which will see the twelve of the best sailors in the US go head-to-head in the typically strong winds and tricky currents of off Virginia Key in Miami!