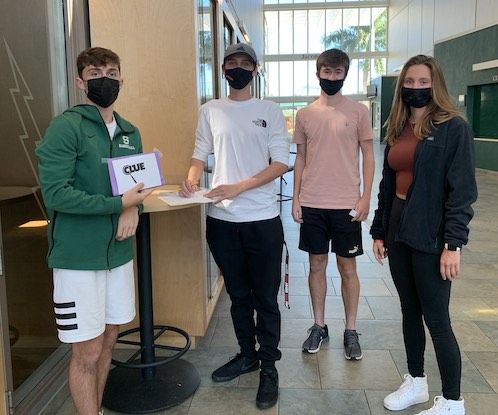 Students were tasked with answering review questions over speculative fiction of Katharine Burdekin's gendered dystopia, a 1937 novel that was penned under the male pseudonym Murray Constantine and lost to time for nearly fifty years until it was unearthed in 1985. Burdekin's story has served as the precursor for George Orwell's "Nineteen Eighty-Four" as well as Margaret Atwood's "The Handmaid's Tale."

Upon answering questions correctly, seniors earned clues to eight locations on campus, such as the Hess Library and Technology Center, the Athletic Center, the Janet Root Theatre, the desk of Ms. Morlando, etc. The Chargers raced up stairs, searched through books, and looked under seats to find what ultimately led them to the pinnacle moment of the game: the pronounced "murderer," the "cause of death," and the "location" -- all of which were altered to bear resemblance to the class's students, the book, and the Shorecrest campus.