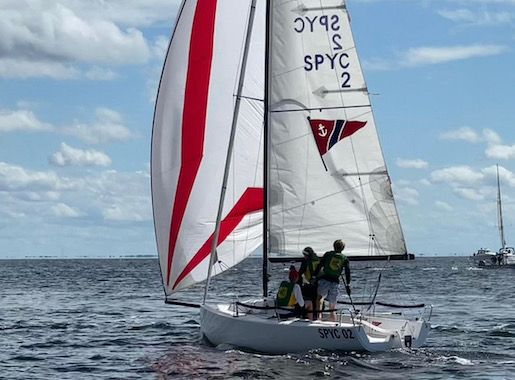 Published on: 11/10/2021
by: Ethan Danielson '22
The Shorecrest Varsity Sailing Team dominated the SAISA Keelboat District Championship last weekend. The Chargers took first place in 5 of the 7 races, clinching an overall victory in the regatta as well as a berth in the national championship!
In the keelboat event, a crew of four sailed a J70, a 22-foot vessel equipped with a mainsail, a jib and a spinnaker. The Chargers demonstrated tremendous teamwork which paid off at the end of the day. Skippering duties fell to co-captain Guthrie Braun ‘22 who proved himself a skilled helmsman and clever tactician. Co-captain Ethan Danielson ‘22 flew the spinnaker with his usual flair and finesse. Andrew Tang ‘22 and Kate Danielson ‘24 worked the halyards and jibs. Tang’s epic quickness and dexterity were truly inspiring, while the young Danielson’s uncanny ability to “call the pressure” — spot the puffs of wind on the course — combined to give Shorecrest a runaway victory.
The National Keelboat Championship will be held on December 10-12 in St. Petersburg. The races can be viewed from the St. Pete Pier for anyone who wishes to support the team and cheer on the Chargers as they vie for the national title.
There are three types of events in high school sailing: keelboat, single-handed, and double-handed racing. Shorecrest has already qualified for the keelboat and single-handed racing national championships. The next double-handed regatta, South Points #3, will be held on November 13 in Sarasota, and the season will continue into the spring. Shorecrest is currently tied for second in the double-handed district standings.