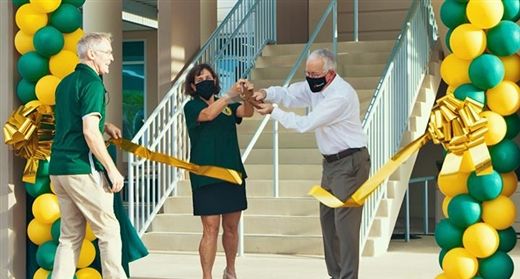 Published on: 9/9/2021
by: Rachel Barrett, Director of Marketing and Communications
On Friday, August 27, 2021, the Shorecrest Preparatory School community gathered to celebrate the opening of the second floor of Charger Commons, the final phase of the School’s most recent capital project. With the ribbon-cutting and reveal, the Transform Campaign was officially closed, ending the 3+ year journey to complete the Shorecrest campus master plan and bring the entire PK3-12 community together.
The second floor of Charger Commons is the new hub of the School’s robust Middle and Upper School STEAM programming. The space features the Hess Library and Technology Center, Smith Center for Innovation, and Reilly Wing for Mathematics - all dynamic student-centered flexible study, classroom and project spaces designed to serve students of today and tomorrow. The second floor also houses programs and services that benefit all students throughout the PK3-12 school, including The Learning Center, the Office of Diversity and Inclusion, and the Advancement and Business Offices. Collaborative spaces like the second floor Seminar Room and the Ohana Community Room round out the final floorplan.
“Charger Commons was designed for the purpose of bringing Shorecrest together and enhancing the sense of community for which Shorecrest is known. It is a building for every single Charger,” said Head of School Nancy Spencer at the second floor ribbon-cutting.
The first floor of Charger Commons, completed in early 2019, includes two Dining Rooms, the Experiential and Lower School Haskell Library, and the Clinic. Charger Commons is also home to The Experiential School, the Tampa Bay Area’s premier early childhood program for 3, 4, and 5-year-old students. Leadership donors Jennifer Vesper and Tom Andrews, along with the  Sher/Conroy families chose to honor former Headmaster Mike Murphy with their gift - naming the Mike Murphy Experiential School building in recognition of his long term commitment to supporting the School’s youngest students.
“We just finished the largest campaign in Shorecrest history with this community’s support,” said Michael Gillis, Director of Advancement. “Mike Murphy had the vision and passion to move this project forward and Nancy Spencer had the courage to finish this campaign and construction.”
The Transform Campaign was publicly launched in March 2018, with groundbreaking in May of the same year. The aptly named project transformed the lower campus, retiring and removing  a total of 11 small buildings that had been a part of the campus since the ‘70s. In addition to creating the new 65,000 square foot facility, the project raised the level of the lower campus, eliminating flooding and creating more usable outdoor spaces for classes, performances, play, and community gatherings. Charger Commons, and the accompanying Weiss Family Pavilion, now houses programs that support each and every member of the Shorecrest community.
Partners in the project include Harvard Jolly Architecture; iConstructors; Halton, Inc.; CMK Design Studio; CI Group; Banko Overhead Doors, Thomas Sign & Awning, Co; Eleven Fifty Seven; and SAGE Dining Services.

View a map of the second floor of Charger Commons.

View photos from the reveal of the second floor of Charger Commons here.

View a video from the reveal event here: