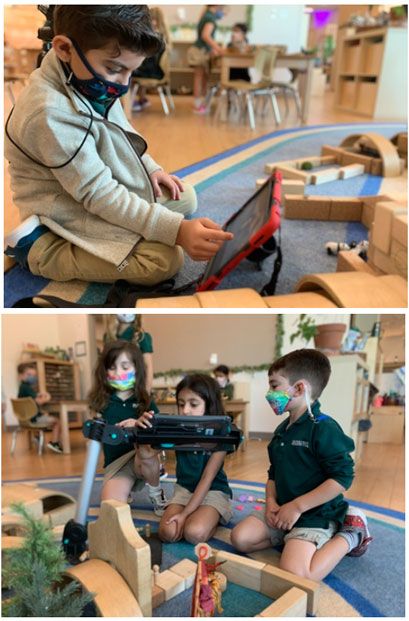 Published on: 5/16/2021
by: Takeya Trayer, JK Teaching Assistant
A main topic of investigation for Junior Kindergarteners in Mrs. Rosas’ class throughout second semester was the zoo and the animals found there. The hand made animal costumes each Charger created were previously featured in ebytes.

As part of the study, children created a zoo out of blocks and toys on the classroom carpet during imaginary play time. JK teaching assistant Ms. Trayer, who has a background in animation, wanted to capture the ongoing narrative the children were creating about animals in the classroom. She decided to teach them how to create stop-motion animation.

The students moved toys in tiny increments and took photographs at each placement to make a stop-motion production about the zoo. They were already familiar with taking photos on an iPad®. With help from Ms. Trayer and Mrs. Rosas, they learned how to use the Stop Motion Studio app, scroll through their photos, and delete unwanted shots. By the third week of “filming” the young Chargers were completely self sufficient movie makers!

Students who were less interested in working with the sets and toys recorded narration to use as voice over. Ms. Trayer combined the stop-motion video output with the audio files using iMovie®.

“Our class loves building with blocks, animals and dramatic play, so I introduced them to stop-motion animation. I wanted to capture the elaborate story they created and incorporate what they learned about zoos. Some students animated, some built, and others recorded audio and voiceovers.” Mrs. Trayer shared.

The teachers were proud of their class for combining their interests and collaborating to form a stop-motion video.