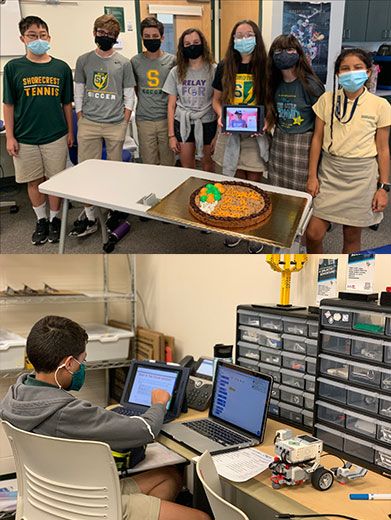 MS Robotics Teams Celebrate Success in State Tournament and Beyond

Published on: 5/27/2021
by: Dr. Anna Baralt and Chris Scoby, Robotics Club Sponsors
Throughout the year, MS Robotics team members built and programmed LEGO robots to navigate missions assigned by the FIRST® LEGO® League. During this year’s REPLAY season, team members also had to learn to code LEGO’s new programming language EV3 Classroom, a drag-and-drop interface based on the coding language Scratch. Team members worked with partners through a series of lessons to learn how to use motors, calibrate and program sensors, and use loops and switches. Teams also participated in a research project to identify and solve a relevant real-world problem.

Both teams had great success at the qualifying and regional competitions earning them bids to the State Tournament held in May 2021. They met with judges virtually via Zoom to display teamwork, discovery, inclusion, innovation, impact and fun while presenting their Innovation Project and Robot Design work.
Team 1448, The Force, did an amazing job in their interviews with the judges regarding their robot and innovative project. Their teamwork was spot on as they answered the judges questions with great detail and showcased a lot of positive energy.

“It was this team’s first time at States,” explained robotics faculty sponsor Chris Scoby. “Even though they didn’t win a trophy, they gained an immense amount of knowledge and experience. I am confident they will come back next year ready to take their game to the next level.”
Team 1449, The R2D2s, enjoyed a stellar weekend in the State Tournament. Most of the team had been to States before and understood the level of competition they faced. One team, The Gucci Einstein’s scored an amazing 495 points in the robot game. The R2D2s had competed against them before. They knew receiving any medal would be difficult, especially with 50+ teams competing. They practiced tirelessly during study hall and after school. Their refined robot runs scored 370 points. This ranked them in 6th place overall in robot performance.
After the first round of judging, The R2D2s were called back in all three areas. They came to school Sunday morning at 9am ready to give it their all. The R2D2s answered the judges’ questions like pros, making sure that each team member had the opportunity to speak.
“I am thrilled to say that their dedication and determination paid off. The R2D2s were awarded the third place Champion Award for the state of Florida. This is a major accomplishment and a dream come true for these Chargers!” Scoby reported. This award celebrates a team that embodies the FIRST LEGO League Challenge experience, by fully embracing FLL Core Values while achieving excellence and innovation in Robot Performance, Robot Design and the Innovation Project.
Due to their high placement in the State of Florida tournament, Team 1449 was also invited to represent the Region at the FLL Virtual Open International Greece Tournament! The event, which will be held virtually June 24-27, will host 200 teams from across the globe to compete in an online event, while Greece celebrates 200 years of independence.
This meaningful message of hope for the future and steadfast global unity from Greece - the birth of the Olympic Games - speaks for nearly 2,000 students from all over the world who continued to innovate in STEM against all odds during this challenging year. All the judging procedures are to be held virtually with the 115 countries connecting and interacting again after a two-year gap, with the help of technology.