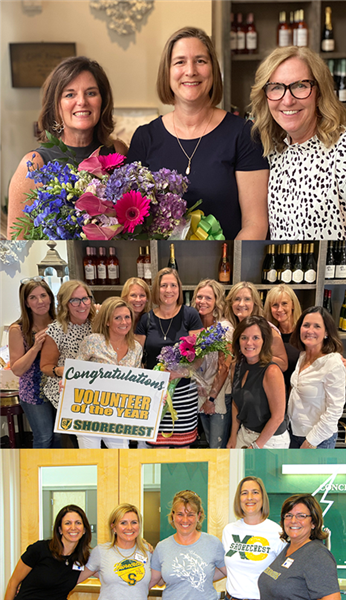 Published on: 5/27/2021
by: Karen Quilty, 2019-20 Co-Janet Root Volunteer Service Award recipient and Alumni Parent
Each spring, the Shorecrest Community Association chooses a winner of the Janet Root Volunteer Service Award. The award is presented by past winners of this prestigious award to a volunteer who has made an impact on campus for many years. This year, the winner was presented with her award and a gift at a surprise gathering attended by many past winners along with Nancy Spencer, Head of School.
The Janet Root Volunteer of the Year Award was established by the Shorecrest Parent Association (now SCA) in 1984, as a commemoration of Janet’s countless volunteer efforts and as a means of recognizing other outstanding Shorecrest volunteers. We continue Janet’s legacy by honoring those who have shown an outstanding volunteer commitment to Shorecrest.
One of last year’s winners, Karen Quilty, explained, "This year’s Janet Root Award winner has worked tirelessly from the minute her daughter started attending SPS in Alpha. If there was a Shorecrest volunteer committee, our winner has been on it. She is efficient, organized, smart and fiscally responsible, benefiting every committee she has served on or led. She has a knack for asking for what she wants and building committees of diverse, talented volunteers to get the job done.
I noticed this from the first time I volunteered with Sydney Legakis when I was the Chair of the Fall Festival fourteen years ago. I asked her to join me the next year, and then she Chaired the Festival the following year and made it even better. Years later she then recruited me to be on the Booster Board she Chaired, and I felt like she was one of the most passionate and efficient Board Chairs I have worked under.”
Prior award winner Anne Dowling had this to share about Sydney: “Organized, efficient, and ready to roll up her sleeves and work! Besides these attributes, Sydney volunteers for the benefit of others, never because she is seeking public accolades. She is selfless, toils away behind the scenes, and would be the last person to expect to win the Janet Root Award. She shows up when asked, even if her child is not involved in the activity. Some of my favorite moments at Shorecrest are the times I worked side by side with Syd. I am thrilled the community is recognizing her volunteering today!”
Over the past 15 years, Sydney has volunteered with the Big Event, Booster Club, Fall Festival, Holiday Greenery, yearbook photos, Grandparents Day, Helping Hands, Box Tops, band, Celebrate the Arts, Shorecrest Cares, the Capital Campaign, as a room parent, and much more. She also started the Cash for Trash and Book Buddies committees.

When asked to list her many volunteer efforts, Sydney reflected, “It was so much fun! So many great memories as I put stuff on the list. So many friends I was remembering who I haven’t seen in years. That exercise was fantastic. I am glad I did it just for the memories.”
In 2020, Andi Mullins was awarded along with Karen Quilty. She added about this year's recipient, “Sydney has been an amazing volunteer throughout her 15 years at Shorecrest. I am so happy for her to be recognized for her endless time and dedication to the students, faculty and the school. Congratulations Sydney!”
Sydney’s daughter Julia graduated last week with the Class of 2021. Congratulations to the Legakis family, and thank you Sydney for your tireless dedication and the impact you have made for so many Chargers and the entire Shorecrest community over the years!!