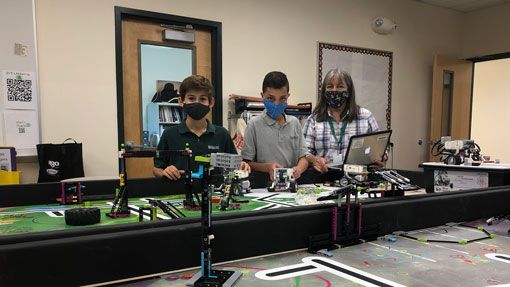 Published on: 5/6/2021
by: Anna Baralt, Director of Educational Technology
The Middle School robotics teams recently competed in the FIRST LEGO League Regional Championships. Team 1448, The Force, won a Breakthrough Award, celebrating their progress in confidence and capability in both the Robot Game and Innovation Project while acting as shining examples of excellent Core Values. Team 1449, The R2D2s, won the top Core Values Award and also had the second highest scoring robot with 355 points.

Both teams earned bids to the State competition the weekend of May 21-23. They will be competing against 46 teams from around the state. Congratulations to the teams for moving forward to the State Championships!