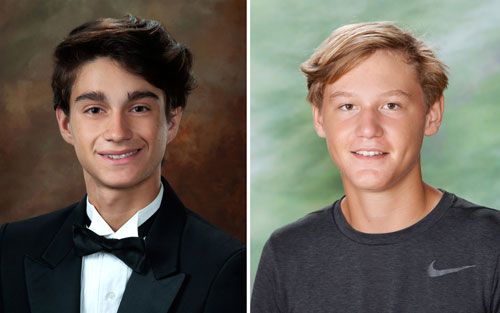 Published on: 4/29/2021
by: Coach Davis
An historic season for the Varsity Tennis Chargers ended at the State Semifinal number 1 doubles team round. The Chargers boys number 1 doubles team of Stefan Bilanovic ‘23 and Tyler Del Zoppo ‘21 represented Shorecrest at the FHSAA State Championships end of season tournament held at Sylvan Lake Park on April 26-28 in Orlando.
In the quarterfinal round, Del Zoppo and Bilanovic upset the number 1 seed from Florida State University Academy at Tallahassee with a hard fought 7-6 (3), 6-3 straight set victory. In the semifinal round they faced a very talented team from Calvary Christian School (Fort Lauderdale) and lost 2-6, 3-6 to the team that went on to win the doubles bracket final.
Coach Davis said he couldn't be more proud of Tyler’s and Stefan's effort. "They both worked and trained hard during the off season and that hard work paid off in how far they were able to advance in the State Championship.”  He said, "We are developing a consistently strong tennis program for both the girls and boys; and the only way to play at a high level in Florida is for our students to train and compete year round. Coach Tommy and I have worked hard to deliver this message to the students and parents and we are beginning to see the results." The strength of our program is evident in our consistent post season competition play and our ability to go deep into the draw.
After a phenomenal boys and girls team showing in post season competition by clinching the Girls District Championship and boys as runners up, both teams advanced to the Regional competition. The girls hosted Tampa Prep in the Regional Semifinals at the St. Petersburg Tennis Center. The boys traveled to Berkeley in Tampa for their semifinal round. The girls team - after being 2-3 down with singles play concluded - went into doubles play with the match on the line. Both the number 1 and number two doubles teams won their matches in an exciting ten point, 3rd set tie-breaker to defeat Tampa Prep and move on to the Regional Final match against Berkeley Prep in Tampa. The girls team concluded its phenomenal year with a hard fought loss to Berkeley Prep, a tennis powerhouse, 0-4. The girls head coach Tommy Del Zoppo said he was exceptionally proud of the girls post season play and all around hard work throughout the tennis season. This is the first time in recent history that the girls team qualified for post season competition. It was a fantastic season!
The boys team similarly had a strong showing in post season competition as District runners up. They too were down 2-3 going into doubles play against Berkely but lost both doubles matches, allowing Berkeley to advance to the Regional Finals with a 5-2 win over the Chargers in Semifinals. This marks the third time in 5 years that the boys team advanced in post season competition to Regionals and the first time for a doubles team to qualify for State Championships. In the past 5 years the boys team has also had two State Championship singles titles and one quarterfinalist.
Coach Bob Davis said he was very proud of the effort and hard work of the team this year.