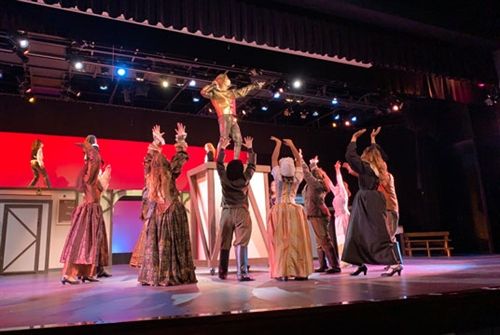 “SOMETHING ROTTEN!” Yields Multiple Broadway Star of the Future Nominations

Published on: 4/29/2021
by: Raffi Darrow, Ebytes Editor
The award-winning Shorecrest Performing Arts thespians are back in the Janet Root Theatre for the hilarious musical “Something Rotten!” through May 1, 2021. The production was reviewed last week as part of the Broadway Star of the Future program presented by the David A. Straz, Jr. Center for the Performing Arts. The show, cast and creative team received high praise from the judges and multiple award nominations!
These nominations are in addition to those received in the fall for the play "Our Town."
Shorecrest will be notified by mid-May which awards the production has received and who is invited to perform at the Broadway Star of the Future Awards Showcase on Saturday, May 29, 2021.
The Straz Center presents the Tony Awards® inspired Broadway Star of the Future showcase to honor artistic excellence in Tampa Bay area high school theater productions, programs and students. Awards and educational scholarships will be presented by the Straz Center and The American Musical and Dramatic Academy. Best Actor and Actress winners are invited to represent the Straz Center in the 2021 National High School Musical Theatre Awards, “The Jimmys®”, based out of New York City.
Reviewers who attended the performance noted, “This is not a show for every program, but it is a fantastic choice for Shorecrest. You have the talent both technically and within your casting pool to do this show justice and that you did.”
“Congratulations on pushing through the multiple challenges that came throughout this production process. Also, thank you for creating a safe environment for your students, crew and audience. The show was truly remarkable and a joy to watch. A huge shout out to the professionalism of all involved. Well done!”
“Something Rotten!” music and lyrics are by Grammy Award winner and Tony Award® nominee Wayne Kirkpatrick and Golden Globe Award and Tony Award® nominee Karey Kirkpatrick; and book by Tony Award® nominees Karey Kirkpatrick and bestselling author John O’Farrell. Shorecrest’s performance is directed and choreographed by Cheryl Lee. Dedicated to musical theatre education at Shorecrest since 1998, Cheryl Lee is Chair of the Performing Arts Department, Director of Cultural Enrichment, and Upper School Musical Theatre-Dance Faculty Member.
Related news: Shorecrest has previously been honored with numerous awardees and nominees in the Broadway Star of the Future Awards. Alumnae Senna Prasatthong-osoth ‘19 and Kylie Heyman ‘15 were prior winners selected to represent Florida at the Jimmy Awards.