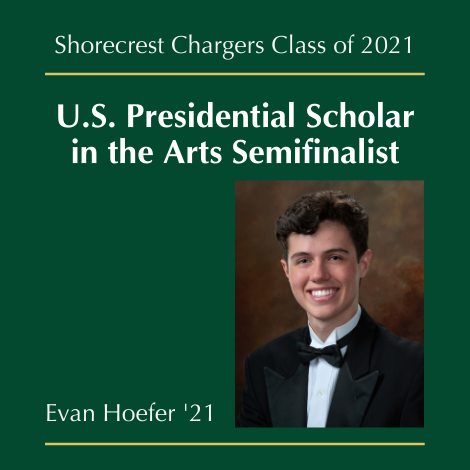 Published on: 4/23/2021
by: Raffi Darrow, Ebytes Editor
Shorecrest Preparatory School senior Evan Hoefer '21, previously named a candidate as a 2021 U.S. Presidential Scholar in the Arts, has been notified of his selection as a semifinalist.

The United States Presidential Scholar program was established in 1964 by Executive Order of the President to recognize some of our nation’s most distinguished graduating seniors for their accomplishments in many areas: academic success, leadership, and service to school and community. The program was expanded in 1979 to recognize students who demonstrate exceptional scholarship and talent in the visual, creative, and performing arts. Hoefer’s high standing in the National YoungArts Foundation’s YoungArts™ competition qualified him as a semifinalist for this year’s United States Presidential Scholars Program.

Hoefer is a talented actor and vocal performer who has starred in a number of Shorecrest Theatre productions and has earned accolades at the Florida State Thespian Festival. He stars this week in "Something Rotten" in Shorecrest's Janet Root Theatre.