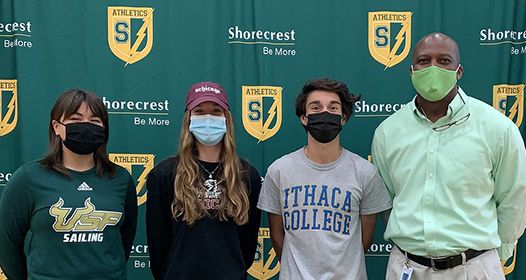 Published on: 4/16/2021
by: Athletics Department
On Monday, April 12, the Athletic Department celebrated three Chargers from the Class of 2021 who will be continuing their athletic careers at the next level. Congratulations to our athletes, their coaches, and their families on being recognized for their dedication.
Julia Craig '21 (Volleyball) – University of Chicago
Tyler Del Zoppo '21 (Tennis) – Ithaca College
Heidi Hicks '21 (Sailing) – University of South Florida
Coach Courtney Draper celebrated Julia saying she was lucky enough to coach her for eight years. "I could not be more proud. Volleyball is typically for the taller athlete. That just means that Julia needed to find her niche and grind it out. That's exactly what Julia did. She focused on the serve, pass and defensive side of the game; and has made a huge impact on every team that she's been a part of."

Coach Bob Davis complimented Tyler saying, "Tyler has had an odyssey from a young seventh grader coming from New York's John McEnroe Tennis Academy trying out for the varsity team, to today's Team Captain bound for Ithaca College. ... Tyler has been a phenomenal team player and a real pleasure to work with. We certainly wish you continued succcess!"

Head Sailing Coach Todd Fedyszyn surprised the crowd by saying he has been working with Heidi since she was eight years old! "There are a few things I think that make Heidi special. One is her passion for the sport of sailing. ... Second is just drive. Sometimes we're in light air and no wind. Sometimes we're heavy air and big seas. Heidi has had the drive to excel in all conditions. And the last thing is leadership. As a younger sailor sometimes Heidi was a little quiet. Over the last couple years she's developed not only as a person but as a real leader on the team. I look at not just the skill of the sailor, but at the person as a whole and we have an unbelievable leader here. No matter what the wind conditions, no matter what the day, she's a prime example of what a team Captain should be."

For anyone who was unable to watch the ceremony live, it can be viewed here:
https://youtu.be/WeYu_fULL8g