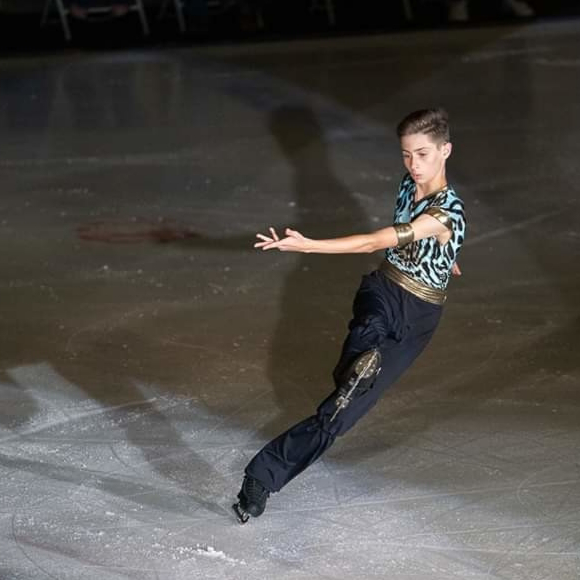 Published on: 4/13/2021
by: Raffi Darrow, Ebytes Editor
Figure skating, the first winter sport to be included in the Olympic Games, can include spins, jumps, lifts, throws, and other elements or moves. Shorecrest freshman Eric Heston ‘24 lives and breathes figure skating, usually working out and skating twice a day during competition season, and nearly daily even when he is taking a break.
“People think figure skating is like dancing and ballet, and it’s not at all. We work out a lot.” Eric debunked.
Heston started skating at around 6 years old, and joined Shorecrest in seventh grade. Now at 15, he says he loves skating. “As you get older sometimes you hate it, but then you love it again. When you do something well it feels really good. It is really fun.”
In January, Heston competed in the 2021 US Figure Skating Championship Series. He placed second in the country in his age group! His results qualified him for the 2021 National Development Team. The Development Team’s national camps, which Heston can now attend with other skaters at his level, will probably take place in May and June. By joining Team USA’s Development Team he will be able to compete internationally.
“People think figure skating is a solo sport,” Eric explained. “You compete by yourself, but you’re usually part of a club of 30-40 skaters. It’s kind of like a team, in a way. When more people do well it raises the level of the club.”
In addition to working with club members, Eric has an influential Coach he admires, Silvia Fontana. “She went to the Olympics representing Italy. If you don’t get something, she pushes you until you get it - but not in a bad way, in a good way.”
When asked how he balances a rigorous training schedule with an aggressive academic curriculum, he said, “Skating makes school harder because of all the practice. I try to somehow manage it. Homework is the only other thing I have time for.  Sometimes I’m tired a lot.”
If your goal is to go to the Olympics, focus is imperative. Eric acknowledges that he is almost old enough to be an Olympian (16 years old is the minimum) but that it is a prospect further in the future. American men skating singles usually need more time to physically develop the required muscle.
When asked what he likes most about Shorecrest, Eric shared, “The teachers are really nice here. They should all keep their jobs.”