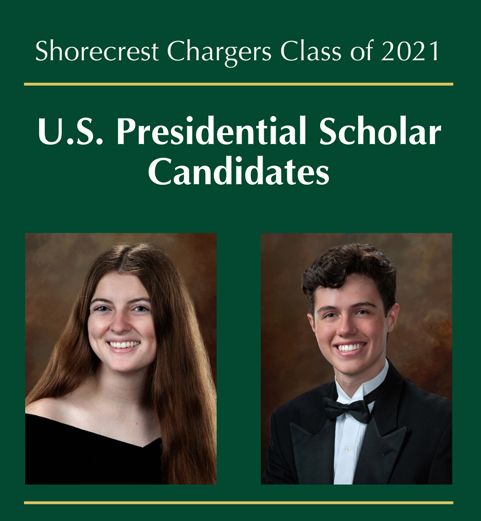 Published on: 2/18/2021
by: Stacy Alexander, Director of Alumni and Community Engagement
Hailey Levitz '21 and Evan Hoefer '21, both graduating seniors at Shorecrest Preparatory School, have been named candidates for the 2021 U.S. Presidential Scholars Program.
The United States Presidential Scholar program was established in 1964 by Executive Order of the President to recognize some of our nation’s most distinguished graduating seniors for their accomplishments in many areas: academic success, leadership, and service to school and community.
Levitz is a National Merit Finalist, National Honor Society Member, an active member of the Pre-Med Club and a talented musician who plays both acoustic and electric guitar.
The United States Presidential Scholar Program was expanded in 1979 to recognize students who demonstrate exceptional scholarship and talent in the visual, creative, and performing arts. Hoefer’s high standing in the National YoungArts Foundation’s YoungArts™ competition qualified him as a candidate for this year’s United States Presidential Scholars Program.
Hoefer is a talented actor and vocal performer, who has starred in a number of Shorecrest Theatre productions and has earned accolades at the Florida State Thespian Festival.
Head of Upper School Don Paige shared, “It is quite rare for a senior to become a Presidential Scholar nominee, but even more so to have two recognized in the same year! Hailey and Evan are both exceptionally bright and incredibly hardworking. They have both achieved a high level of success and have showcased a commitment to Shorecrest’s Core Values. We are very proud of them.”
About the U.S. Presidential Scholars Program:

Inclusion in the U.S. Presidential Scholars Program, now in its 57th year, is one of the highest honors bestowed upon graduating high school seniors. Scholars are selected on the basis of superior academic and artistic achievements, leadership qualities, strong character and involvement in community and school activities.
Over 4,500 candidates were selected for their exceptional performance on either the College Board SAT or the ACT Assessment. Further consideration is based on students’ essays, self-assessments, school recommendations, and more.
The Commission on Presidential Scholars, a group of up to 32 eminent citizens appointed by the President, will make final selections of Scholars. They will select one young man and one young woman from each state, the District of Columbia, Puerto Rico, and U.S. students living abroad; 15 students at-large; and up to 20 students from the creative and performing arts. The U.S. Department of Education will announce the Scholars in May.
Scholars will be invited to Washington, D.C., for several days in June to receive the Presidential Scholars Medallion at a recognition ceremony and to participate in events and activities.
Click here for more information about the U.S. Presidential Scholars Program.