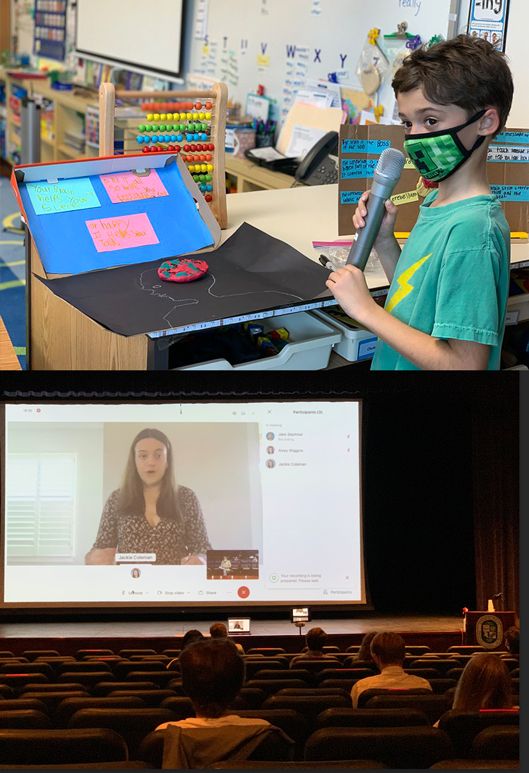 Published on: 2/11/2021
by: Nancy L. Spencer, Head of School
Projects and presentations are a big part of life at Shorecrest. I was recently able to join in and observe students from the Lower School to the Upper School presenting their cumulative projects. In first grade, I viewed their Project Share about the Human Body. I also sat in as English Honors tenth graders presented their “This I Believe” essays in the Janet Root Theatre. I was so impressed by their presentations and projects which exemplified our students’ originality and work ethic, their willingness to talk about their experiences, and the support that they received from their teachers to ensure success. We talk a great deal about project-based learning, and it was inspiring to see this process in practice.
In the Lower School, I settled into my chair in a first grade classroom and watched as each student took the microphone, introduced him or herself, and proceeded to speak about their project on a system or part of the Human Body. Each presentation was recorded for families at home to watch, and the children in the classroom learned skills about how to be a good audience. The students at home on the Flexible Learning Program were able to present via video. While some first graders were nervous, they clearly had practiced many times. All of them did a great job and were encouraged and supported by their teachers and classmates.
There were projects about the respiratory system, the nervous system and the digestive system, among many others. I learned about how a bone heals, complete with a real x-ray and actual cast as artifacts. I saw a genuine calf’s heart with an explanation of the different parts of the heart. I discovered that an adult brain is about the size and shape of two fists squeezed together.
One student used a piece of popcorn to track the journey of food through the digestive system, explaining how food first sits in one’s stomach for four to six hours before moving through the small and large intestines, which she created out of colorful clay spiraled to represent these organs. Another pair of students used yarn and egg cartons to demonstrate how the spine protects the nerves. And I watched one first grader reveal how lungs inflated and deflated, using a model composed of a straw and two small balloons. I was thoroughly impressed by the creativity and sheer content of these presentations, as well as how independently these first graders approached their projects. (More here.)
The “This I Believe” essay contest was started by journalist Edward R. Murrow in 1951 to allow anyone to distill the guiding principles by which they lived. These 6-10 minute speeches represent a high school sophomore’s beliefs and life lessons. Ably choreographed by English teacher Jake Seymour, these students presented their thoughts and observations about life to their classmates. Upper School students were invited to attend (masked and in socially distanced seats) and in years past, Lower and Middle School classes have joined the audience in the Janet Root Theatre to watch. In fact, this class of sophomores can remember sitting in Mr. Seymour’s room as Lower School students, watching the high schoolers' speeches.
The speeches were livestreamed so that students on the Flexible Learning Program could participate, both as presenters and as observers. When it was time for a student on Flex to present, the large screen in the Janet Root Theatre lit up with that student’s image; and technology enabled the audience to watch and listen to the presentation.
The topics of these speeches ranged from light-hearted to serious and included emotional stories about challenging experiences and hard-learned lessons. I was so impressed by these students’ willingness to share their beliefs and the motivations behind them, often revealing quite personal information. The content was informative and wide-ranging. In addition, I was impressed with the delivery of the speeches. The skill of public speaking has never been more important in our ability to communicate with others. It was clear how much effort and practice each student had put in to prepare to speak in front of a large audience. As with our younger students, there was such an atmosphere of support for each speaker: warm introductions before the speech began; cheers and applause at the end of each presentation.
One of the best parts about being a Head of School is having the chance to watch our teachers and students in action. When a student is giving a speech or making a presentation, there is a split-second at the very end, when the speaker realizes that it’s over. There is almost a visible flash of confidence, a special moment when I imagine they are thinking, “I’m finished. Look at what I’ve done!” Students recognize their accomplishments and build upon their successes.
These are the moments that reinforce the value of project-based learning at Shorecrest.
All the best,
Nancy