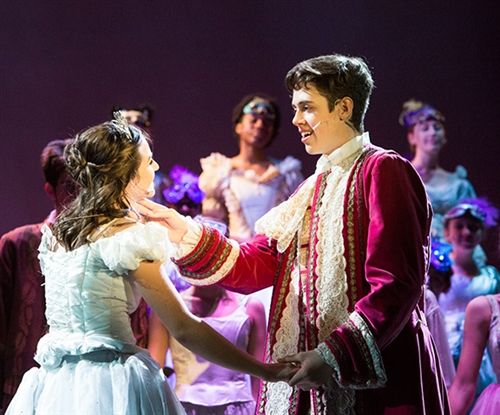 Published on: 1/4/2021
by: Rachel Barrett, Director of Marketing and Communications
Shorecrest senior Evan Hoefer ‘21 has been named a 2021 National YoungArts Foundation Award winner for his exceptional achievement in Theater. YoungArts award winners at all levels will receive cash prizes between $100 and $10,000 and the opportunity to learn from leading artists such as Debbie Allen, Mikhail Baryshnikov, Frank Gehry, Wynton Marsalis, Salman Rushdie and Mickalene Thomas. As a YoungArts finalist, Evan is eligible to be nominated to become a U.S. Presidential Scholar in the Arts, one of the highest honors given high school seniors bestowed by the President of the United States.

“YoungArts empowers artists to pursue a life in the arts beginning at the critical time when many are faced with decisions about life after high school; and we are thrilled to announce this year’s YoungArts award winners. This group of extraordinary artists has reminded us yet again that extraordinary artistry is ageless, and I encourage everyone to get to know these faces and names as we will be seeing them for many years to come,” said YoungArts Executive Director Jewel Malone.

As a finalist, Evan is invited to participate in National YoungArts Week+ in January 2021, featuring virtual classes, workshops and mentorship from leading artists in their fields as well as virtual performances and an exhibition for the public.

A dedicated performer, Evan has held a number of roles in Shorecrest Performing Arts productions including Prince Topher in “Rogers + Hammerstein’s Cinderella,” a role in which he “displayed tremendous charm,” says his choreographer and teacher Cheryl Lee. He further demonstrated his innate storytelling abilities with his characterization of Mark in the Shorecrest production of “A Chorus Line.”  In February of 2020 he was cast as Reverend John Hale in “The Crucible,” a role for which he won Broadway Star of the Future’s Outstanding Supporting Performer in a Play.  His defining leading role thus far was his virtual performance as Che in Shorecrest’s presentation of “Evita” which was broadcast virtually in part by the Straz Center during state quarantine restrictions due to COVID-19.

Evan is one of only 19 students (aged 15-18) selected nationally in the category of Theater by an esteemed panel of artists through a rigorous blind adjudication process. YoungArts award winners gain access to one of the most comprehensive programs for artists in the United States in which they will have opportunities for financial, creative and professional development support throughout their entire careers.