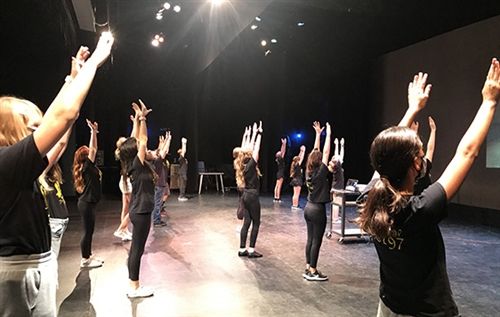 Published on: 11/19/2020
by: Stephanie McCarthy, Jr. Thespians Director
Shorecrest Middle School Jr. Thespians Troupe 88197 experienced their first Virtual Thespians Festival this year. The event came with a few changes, not only by being virtual, but also by being stretched from a District Festival into a Florida North Regional Festival.

Twenty-three talented Chargers put together 28 performance acts and created 7 technical designs which were filmed and submitted to the Florida North Region Jr. Thespians for adjudication by judges from across the country. The video submissions were uploaded in October, and during the festival itself the Troupe was able to enjoy their video performances, critiques, and festival workshops in the Janet Root Theatre.

The theme for the festival this year was Keeping the Light On, which featured a picture of the traditional theatre "Ghost" light.

The Results:
24 acts/designs received a score of Excellent, and the following 8 acts/designs received Superior ratings and will move on to the Florida State Festival in March:
The Jr. Thespians also held their Award Ceremony from last year's awards that were not able to be given out in May due to COVID-19. Last year's Troupe members who had moved on to Upper School joined in for the ceremony and received their International Thespian Society honor awards based on merit points earned from performances during their time in Middle School.