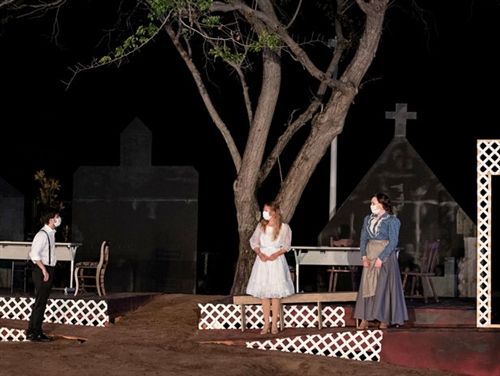 "Our Town" Reviewed for Broadway Star of the Future

Published on: 11/23/2020
by: Raffi Darrow, Ebytes Editor
Shorecrest Performing Arts announces continued success of “Our Town.” The recent Upper School outdoor production was reviewed as part of the Broadway Star of the Future program presented by the David A. Straz, Jr. Center for the Performing Arts.

The judges did not miss a detail in their critique -- from hats to props to lanterns in the audience marking socially-distanced seating.

“I greatly enjoyed seeing Our Town at Shorecrest Prep! Ultimately, I could see how hard the cast, crew, director, and production team worked to bring the characters and feel of ‘Our Town’ to life. Technically, the show really hit its mark and established the tone of the play well. During most of the production, most of the ensemble seemed relaxed, focused and in the moment. Most of the cast worked together demonstrating strong character choices, engagement and energy. It was evident that each character had their own opinions and desires in the world. There were some wonderful moments of acting that revealed this throughout the play.”

“Shannon Ross did a phenomenal job of embodying the innocence, the struggle, and the personality of Emily. In voice and body, Shannon made clear decisions that reflected Emily's needs, goals and objectives. She shined best in scenes with other characters where she authentically responded to dialogue in a way that felt natural,” the judges reported of the female lead - who, along with the rest of the cast and crew - was masked for COVID-safety throughout the performance, forcing her to rethink performance and gesture.

In a show full of dialogue with few props to keep the hands of the cast busy while chatting, judges noted, “Zoe Henry displayed the strongest pantomime skills during the performance.”

About the set in the Greenspace outside Charger Commons, one judge wrote, “I LOVED how the set was built around an oak tree. I also loved how the dirt-mound served as a platform/walk-space. All of the details - from the lattice work on stage to the centering of the stage around a prominent tree, and the lanterns marking each audience pod - were thought out and created a unique experience.”

Director Bill Leavengood ‘78 will learn more about this year’s Broadway Star of the Future Awards and possible inclusion in performances in May 2021.

Among numerous other prior Shorecrest awardees and nominees in the Broadway Star of the Future Awards, alumnae Senna Prasatthong-osoth ‘19 and Kylie Heyman ‘15 were winners selected to represent Florida at the Jimmy Awards.