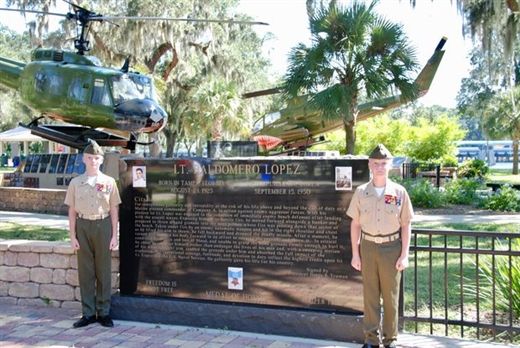 Zach and Tim Zeliff '24 win awards for their presentation of a local hero Lt. Baldomero López

Published on: 9/18/2020
by: By Philip Morgan, "Tampa Bay Times" Correspondent
Tuesday marks the 70th anniversary of the death of Marine Lt. Baldomero Lopez, a Tampa native who smothered a grenade with his body during the Korean War battle of Inchon, thereby saving the lives of the men around him. He was posthumously awarded the Medal of Honor.

Twins Zach and Tim Zeliff '24, who turn 15 this month, won first place at Shorecrest Preparatory School in St. Petersburg, and made it to the state finals in 2018-19 for a National History Day project on Lt. Lopez’ sacrifice. They also won the Medal of Honor Character Development Award from the Medal of Honor Society and the state Hispanic Heritage Award from the National Society, Daughters of the American Revolution, Fort San Luis Chapter.

The boys are members of the Young Marines, a 61-year-old organization similar to Scouting that teaches teamwork, leadership and self-discipline and promotes a drug-free lifestyle. Their father, retired Marine Lt. Col. Mike Zeliff, is national executive director of a foundation that raises funds for the Young Marines. Their mother, Barbara Zeliff, a lawyer, is a retired Navy commander. Mike Zeliff credits retired judge and Tampa history lecturer E.J. Salcines for teaching the boys much about Lopez.
As for future careers, Zach is thinking of something in the private sector, and Tim says a military career is one of the options he’s weighing after college. They talked with the "Tampa Bay Times" about their project.

Why did you decide to choose Lt. López for a National History Day project?
Tim: We just did it because we felt strongly about it. We could really well relate to this guy who was a Marine. Our Dad was a Marine. Purple Heart. Our dad also had a Purple Heart. And he went to the Naval Academy. My mom went to the Naval Academy. He lived in Florida, and we live in Florida. So that was kind of the thing that really drove us to want to work as hard as we could on it. The awards came after, and those were just things that kind of were cool to see, that other people felt that our work deserved an award.

You say you were looking for a project when your father suggested Lt. Lopez. He showed you a photo of Lopez leading his men over the seawall at Inchon. What kind of impact did that have?
Zach: When you see a photo of a leader climbing over the wall, not only are you intrigued and you want to know the story behind it, but you also want to know the person behind it.

What was he like?
Tim: He grew up in the local area, and he came from a relatively, not poor-poor, but not a very rich family. He was a student athlete. He went to the Naval Academy… He had a nickname; it was Baldy, I think. He just kind of seemed like the person that everybody would want to be friends with. He was just an average person. He wasn’t anybody overly special. He is now.
When you read about the sacrifice he made, what did you think?
Zach: It’s not something that you plan out. It’s not something like, ‘If I was in this specific situation, I would do this.’ It’s kind of very powerful that it was instinct. He probably thought about it and he knew what he wanted to do, and it was a selfless action.
You each received an award and $250 from the Medal of Honor Society. What was it like being at the convention in Tampa last year among recipients of the nation’s highest military honor?
Zach: That was probably the best part of the whole experience. You can hear that you got an award from them. You can cheer them. You could do a project about them. But when you get to meet the veterans, it’s quite astonishing… because that’s when they turn from legends into people. When you can talk to them, not just read about them but actually talk to them… They were the embodiment of who I thought Baldomero López would be as a person. They’re funny. I could see a young man in these seniors, and I could see kind of the heroism, leadership… They were really cool people.

Tim: They were all Medal of Honor recipients, but if you walked in there you wouldn’t think they were because they’re just so humble about it. The common theme was they all felt they were in the right place at the right time… Obviously, it was a bit more than that. But they didn’t really jump out to tell their story, they weren’t bragging about anything. I wouldn’t say that they were super uptight about it, but it wasn’t something that they were going to go and show off.

You joined the Young Marines when you could at age 8. You heard about it from your dad, and you say you were enthusiastic about it early on.
Tim: We got to do color guards at the World War II memorial (in Washington, D.C.), and that was why we were kind of inspired to continue with Young Marines… We did drill and we practiced it. Since we didn’t have a whole lot of people (in the Tampa Bay unit), we had limited options for who could be the rifles and who could be the flags. And we were lucky enough to be the rifles, when normally we were too low, rank-wise, to be rifles.

Zach: We really wanted to do it, and I remember when I tried, my biggest fear of doing the flags – and why I did the rifles – was because I really didn’t want to drop the flag. Some DC days would get pretty windy, and that was my biggest fear. I wouldn’t want to ruin the memorial (ceremony).