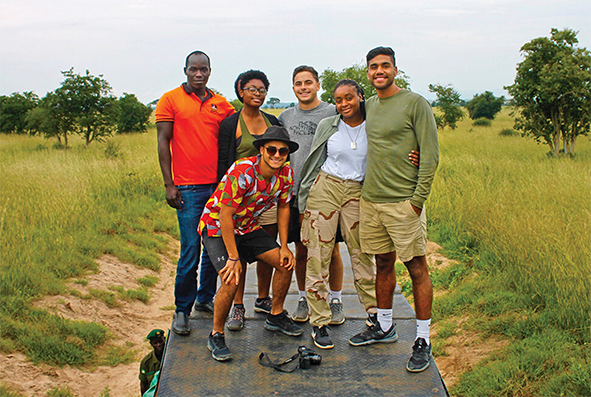 Published on: 8/27/2020
by: Florida Trend's "NEXT"
What do food and medicine have in common? They have the same goal: the health and happiness of all people. Two graduates of Shorecrest Preparatory School in St. Petersburg have joined together to start a non-profit called People4Tomorrow, which combines these seemingly different fields into a single, powerful mission: “to catalyze the regeneration of our planet, our societies, and ourselves through education, advocacy, and collaboration.” Dylan Leary '16 and Seif El Masry '16 were fortunate to travel the globe while in high school, as part of Shorecrest’s annual Service Week. On trips to Peru, Costa Rica, and Uganda, these young men were inspired by the efforts of those working to mitigate the suffering caused by extreme poverty.

The seeds of change, planted during their travels, took a few years to sprout. The boys graduated and went their separate ways: Dylan to the Culinary Institute of America and Seif to the University of Florida. While in college, they continued to hold tightly to their service commitments. Dylan spent a semester on a regenerative, biodynamic farm in Southern California learning about sustainable agriculture, and Seif, then a pre-med student, went to Panama with Global Medical Training to provide free health care. Both wanted to extend their experiences beyond their schooling. In 2019, People4Tomorrow was born. Combining their expertise in food production and medicine with their passion for education and giving back, Dylan and Seif chose to concentrate first on the community of Soroti, Uganda.

Seif’s medical team worked with physicians and staff at Princess Diana Memorial Hospital, donating time, money, and supplies. They treated over 1,000 patients and delivered three babies — and one of them was named after Seif. Dylan’s hospitality team led workshops on gastronomy, hospitality, and agriculture for food workers in Soroti at Camp Saint Mary, a resort hotel founded by his grandparents. They planted fruit trees, composted, and shared food and fellowship over the course of several days. Their work in Uganda laid the groundwork for a life dedicated to service. Seif is starting medical school in the fall of 2020, following in the footsteps of his biggest inspiration — his father.

Seif says, “He saves the lives of people from all walks of life.” A concentration in population health and international medicine will complement Seif’s work with People4Tomorrow. Dylan is taking over the reins while Seif earns his medical degrees. As executive director, he plans to use his home base in St. Petersburg as the “test kitchen” for new programs and initiatives before, he says, “expanding our network to the entire globe.” Dylan looks to changemakers both global and local for inspiration, citing his parents and grandparents, former teachers, and Chef José Andrés of World Central Kitchen as role models.

Dylan says, “It’s time to finally dispel the thought that we can eat all the junk in the world, get sick, and then take a few pills to erase the damage. The current research into the gut microbiome and its implications for all aspects of human health is revolutionary and is finally proving the age-old adage that food is medicine.”

It starts at home. People4Tomorrow has big plans. Global plans. But the COVID-19 outbreak has forced them to re-evaluate. Dylan and Seif returned from their trip to Uganda wanting to apply what they’d learned to their own community.

“One of the biggest lessons to come out of this is that we need more community-based resilience,” says Dylan.

How do we increase our ability to stay well and build immunity in case of future outbreaks? One solution is to increase access to fresh, whole foods. At home in St. Petersburg, the folks at People4Tomorrow have begun construction on an urban farm and education center in Campbell Park.

“The most effective way to improve access in areas that lack it is to actually grow the food there,” says Dylan.

People4Tomorrow plans to offer education, training, and employment — as well as healthful, organic foods — for people in the neighborhood. Their ultimate goal is to create an interconnected network of urban gardeners, farmers, artisans, chefs, and eaters, across St. Petersburg and, one day, the planet.


Original Story: https://floridanext.com/changemakers-launch-people4tomorrow/
Photo from NEXT.