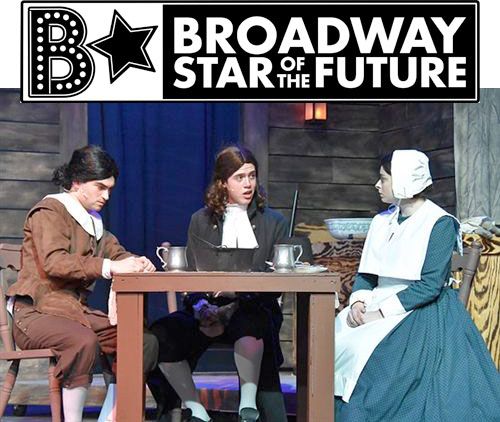 Published on: 8/17/2020
by: Stacy Alexander, Director of Alumni and Community Engagement
Evan Hoefer ’21, Eric Jacobson ’21, and Shannon Wright ’20 were honored during the 2020 Broadway Star of the Future Awards Showcase which aired on July 26, 2020, via YouTube. The Straz Center hosts the annual Broadway Star of the Future Awards Program to celebrate the outstanding achievements in high school theater in the Tampa Bay Area. Broadway Star of the Future Awards are Regional awards affiliated with the National High School Musical Theater Awards (NHSMTA) or the Jimmy™ Awards.
Eric Jacobson ‘21, who played John Proctor in Shorecrest Preparatory School’s “The Crucible,” was awarded Outstanding Actor in a Play. Evan Hoefer ‘21, who played Reverend John Hale in “The Crucible,” was awarded Best Outstanding Supporting Performer in a Play. A team of theater professionals, college faculty and industry experts reviewed the shows and individual performances.
Of his award as Outstanding Actor in a Play, Eric shared, “I feel honored and humbled getting this recognition of my work - especially as somebody who started acting under 3 years ago. It was a complete surprise to me and one that was very meaningful.”
During the showcase, Shannon Wright ‘20 was recognized as a Top 5 Senior Girl and performed a number from Shorecrest’s virtual performance of “Evita.”
In addition to their Outstanding Actor and Outstanding Supporting Actor awards, Eric and Evan were the only two students selected to receive scholarships awarded by AMDA College of the Performing Arts and The American Musical and Dramatic Academy.
Evan adds,  “I really couldn’t have done any of this without the help from our outstanding directors! Mr. Leavengood ('78) directed and starred in “The Crucible,” and he led both Eric and I to reach success. Ms. Lee has helped me so much with the college process so far, and she has done so much research to make sure we were given the opportunities that we had. For me personally, it feels so gratifying to see my hard work pay off, and I thank my directors endlessly!”
To view this year’s showcase, including a solo performance by Eric Jacobson '20, a performance by Troupe 3140 of “Evita,” and a guest host appearance by Senna Prasatthong-osoth '19, visit:  https://www.youtube.com/watch?v=7IRTR0LEHuQ.