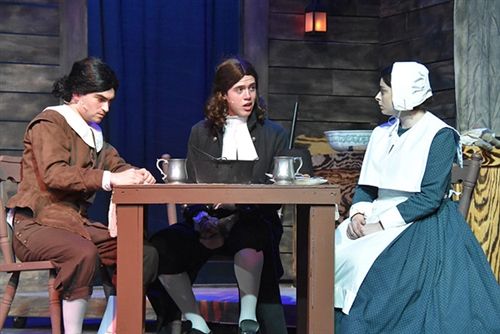 Published on: 6/12/2020
by: Stacy Alexander, Director of Alumni and Community Engagement
Two Shorecrest Thespians have earned coveted Broadway of the Future awards for their roles in Shorecrest Preparatory School’s production of “The Crucible” directed by Bill Leavengood ‘78. Eric Jacobson ‘21, who played John Proctor, was awarded Outstanding Actor in a Play and Evan Hoefer ‘21, who played Reverend John Hale, was awarded Best Outstanding Supporting Performer in a Play. A team of theater professionals, college faculty and industry experts reviewed the shows and individual performances.
The winners were announced virtually with a rescheduled 2020 Broadway Star of the Future Awards Showcase now set for July 26, 2020, at the David A. Straz, Jr. Center for the Performing Arts. If permitted the event will be presented as an on-site live awards showcase. The Straz is also preparing for a standby virtual awards showcase.
The Straz Center hosts the annual Broadway Star of the Future Awards Program to celebrate the outstanding achievements in high school theater in the Tampa Bay Area.  Broadway Star of the Future Awards are Regional awards affiliated with the National High School Musical Theater Awards (NHSMTA) or the Jimmy™ Awards. The Jimmy™ Award for Best Performance by an Actress and Best Performance by an Actor in an Approved Musical is awarded annually to two grand prize winners selected from a group of student performers representing participating professional theatres nationwide. Due to the ongoing COVID-19 pandemic, the Broadway League has canceled the 2020 Jimmy Awards.
In addition to his Outstanding Actor in a Play nod, Eric Jacobson was chosen to submit his performance to the Broadway Star of the Future Awards Showcase. Also being considered for the showcase and for Outstanding Lead Actress and Actor in a Musical are performances by Shannon Wright ‘20 as Eva, and Evan Hoefer ‘21 as Che from Shorecrest’s virtual production of “Evita.”