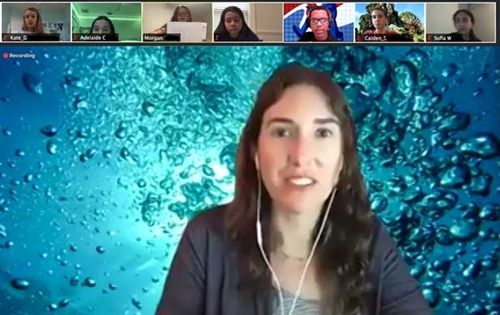 Published on: 5/27/2020
by: Raffi Darrow, Ebytes Editor
Traditionally during Celebrate the Arts Week, two mornings are dedicated to opening up the campus to artists from the surrounding community to work hands-on with Experiential School, Lower School and Middle School Chargers. This April, Middle School students had guest artists visiting via Zoom - rather than in their classrooms - due to the COVID19 quarantine. Lower School had Celebrate the Arts in May.

Local writer and Shorecrest parent Maria Mora met with eighth graders over Zoom for a special writing session during Celebrate the Arts. In what she called "Flash Writing," Ms. Mora would show a photo on screen for about a minute, and have students free write what came to mind when they saw the image. However, students were meant to keep one continuous story flowing as they were shown multiple images.

"Think about emotions, smells, sounds - imagine being there when you see a photo. Putting rules around creative writing might help you to create something unexpected you might not have known you were capable of doing," she explaiend as part of the purpose behind the exercise.

Students then volunteered to share their writing with the group and Ms. Mora pointed out what was unique about each Charger's style.

Students were also able to hear about Mora's writing background (she started in third grade) and a bit about the publishing process.

Maria Mora's young adult novel "Fragile Remedy" is due for release on March 9, 2021.