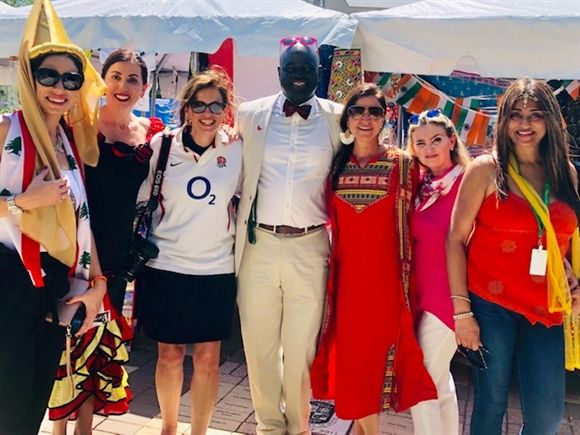 Published on: 5/21/2020
by: Raffi Darrow, Ebytes Editor
In June, the Shorecrest community will bid farewell to the Cooper-Nixon family. Daisy ‘25, often found singing as part of a Middle School rock band, and Theo ‘27, known for his “cheeky” sense of humor, have grown from Lower School to Middle School during their time as Chargers.
Paula Cooper, the matriarch of the family, has been a volunteer dynamo at Shorecrest from day one! With a friendly demeanor and quick, detail-oriented intelect, Paula helped make change where she saw a need. She is both a thinker AND a doer. At Shorecrest, she shared innovative ideas, honest critique, time, talent and skill.
Paula’s most lasting legacy at Shorecrest will most likely be establishing the International Connection group with Nuria Lisa Hahn. The group strives to represent and connect the many cultures of Chargers.
Paula and Nuria met at the school several years ago. While sharing ideas one day, they realized they both had a vision that all international families at Shorecrest would one day come together as a network to support one another. A 2019 family survey revealed that over 65 different countries were represented by Shorecrest families, faculty and staff. This diverse group of families is on its second year of connecting and have executed an inaugural International Festival on campus last spring.
“Paula and I have had a blast working side by side, watching this group blossom,” said Nuria. “We have become so close, we sometimes finish each other’s sentences. She is congenial, witty and a glass half full type of person. She takes charge instantly and does not rest until a task is accomplished. I will miss her terribly. But I have plans to visit her in her hometown in the UK.”
Susi Bean, who will be stepping in as the new co-Chair of International Connection with Nuria, is in awe of the “extremely large shoes to fill” that Paula leaves behind.
“We joined Shorecrest 3 years ago and went to the Lower School Social at the beginning of the school year,” Susi explained. “I heard a British accent at the bar and the rest, as they say, is history! We have been great friends ever since and I am going to miss Paula dearly. I’ve never seen anyone throw themselves into school life as much as Paula, whether it’s with the International Connection or ‘Wizard of Oz’ or the million other projects she has taken on. She takes on any project at 110% and gives it her absolute all.”
Roderick Avery Fludd, Shorecrest’s Director of Diversity and Inclusion, was the point person on campus Paula and Nuria turned to when creating the defining group for international families on campus.
“From the first day Paula came into my office, I knew that she would be a great friend and advocate for Shorecrest,” he said. “Her love for the school shows every day and we (Shorecrest) have been all the better for having her in our lives. The International Connection group has grown into a great organization that supports Shorecrest in providing our children with exposure to global cultures, celebrations and traditions. Thank you Paula, for making your mark on Shorecrest that will always be remembered and appreciated. We will miss you.”
Susi adds, “Her vision is for Shorecrest to be the destination for international families and families who want a global perspective for their children. She goes out of her way to connect with every international parent in the school and to make them feel welcome and included. We couldn’t have asked for a better ambassador.”
Dr. Jean Spencer-Carnes, Shorecrest’s Director of Admissions and Enrollment Management, acknowledged Paula’s abilities to connect with new families as well. “I can't tell you how Paula Cooper added creative value to Enrollment Management during her time at Shorecrest! She enriched my team with ideas to attract and retain international families and she worked diligently, personally, with them to make their journey more comfortable and friendly. Oh, how I will miss her and her children!”
Paula was also an avid volunteer backstage in the Janet Root Theatre. She helped with costume design, photography, and keeping students on cue during performances.
“Without fail, Paula was always the first to volunteer for band events, and enthusiastically supported her children's many musical pursuits,” reported Ethan Updike, Shorecrest’s Band Director. “The students of the band program and I are very lucky to have had Paula as a member of our community. She was a model parent volunteer and will be greatly missed. We wish you and your family the best in your new adventure!”
Paula Cooper has touched so many lives on campus. She will be remembered for building connections, encouraging volunteers, supporting the arts and going after great, big ideas to help the whole Shorecrest community Be More.