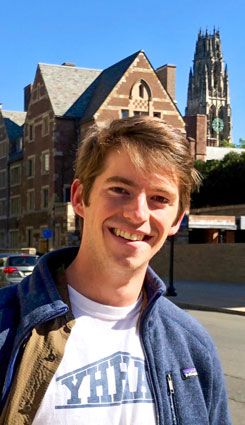 Published on: 5/21/2020
by: Alumni Association
Jackson Stovall Willis ‘15, who began Shorecrest in Jr. Kindergarten, graduated Valedictorian, was Shorecrest's first U.S. Presidential Scholar, was named Outstanding Senior in 2015, and headed to Yale University. There he studied in the Directed Studies Program in Western Thought, the Peace and Dialogue Leadership Initiative, and Brady-Johnson Program in Grand Strategy, where his research focused on shareholder activism for social responsibility.
Outside the classroom, Jackson was primarily involved as chair and volunteer for the Yale Hunger and Homelessness Action Project (YHHAP) — Yale’s largest service organization, and he served on the Board of Directors for Dwight Hall. Interested in Art History (thanks, Mrs. Gaglio), Jackson served as a student curator and gallery guide at the Yale Center for British Art. He also worked for the Ramsar Convention on international wetlands as a Robin Berlin Fellow, at the Yale Investments Office in the foreign equities division, and with St. Petersburg’s Dali Museum on a U.S. Cuba art exchange.
Yale granted Jackson a one-year leave between junior and senior year to serve with the Peace Corps Response working in the politically destabilizing youth unemployment crisis in Guinea, West Africa. There, his team operated the country’s leading employment incubator and small business accelerator, testing the limits of social franchising for both emergency and long-term employment gain.
While at Yale, Jackson studied creedal democracy, development economics and the intersections of law and humanities. He has since been awarded a full fellowship through Rotary International to read for an M.Phil. in Development Economics in fall 2020, at St. John’s College in Cambridge, UK. He will attend Yale Law School in the fall of 2021.
Jackson received both the John C. Schroeder Award and the David E. Chantler Award from Heads of College. At Yale’s May graduation, Jackson was surprised to receive the prestigious James A. Hass Award, given to “that member of the senior class in Yale College whose breadth of intellectual achievement, strength of character, and fundamental humanity shall be adjudged by the faculty to have provided leadership for his or her fellow students, inspiring in them a love of learning and concern for others.” The Haas recipient and Valedictorian are Yale’s highest senior awards.

“I appreciate my 14 years at Shorecrest, and the support of the administration and my peers. In particular, I thank my teachers, who gave me every opportunity to learn,” said Jackson. “Shorecrest will always be a touchstone for me.”