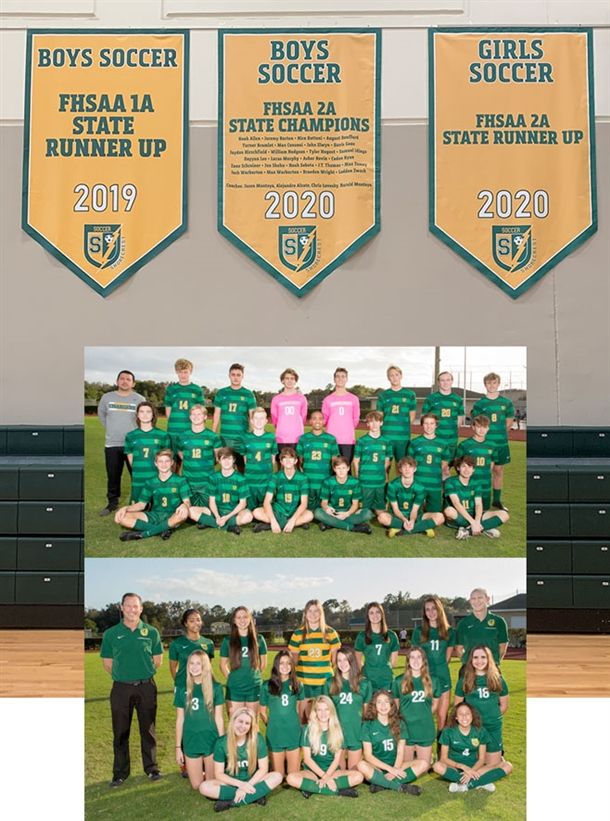 Published on: 5/7/2020
by: Stacy Alexander, Director of Alumni and Community Engagement
Off season workouts, countless hours of in-season training, persistence and total team commitment all marked this year’s varsity soccer teams. Both teams excelled during the regular season while increasing their footprint in Florida high school soccer.
At the completion of the regular season this year’s Charger Boys and Girls Varsity Soccer teams went on a relentless pursuit of perfection during the postseason. The two teams collectively outscored their opponents by a resounding 55 to 5. For the first time in Shorecrest history both Girls and Boys Varsity Chargers Soccer Teams advanced to the State Championships.
In late February, 2020, the school community brought their Charger spirit to DeLand’s Spec Martin Memorial Stadium.
On February 26, in the rain, the girls team faced a difficult opponent, St. Johns Country Day, State Champions for their 9th consecutive year. The game was a hard-fought 0-4 loss.
The following day and after a heartbreaking loss in last year’s state championship game, the boys teams’ quest for a state championship came to a victorious end with a 4-0 win over Maclay.
The Charger soccer teams had a combined playoff record of 13-1!
Their teamwork and dominance were a joy to watch and will provide lasting memories for the Shorecrest community for years to come. Not only did our varsity soccer players make an impact on the field, they inspired our younger Chargers.
On May 5, during the last Upper School Community Meeting we celebrated the players and coaches of the Boys and Girls Varsity Soccer teams for a remarkable season. State Championship and State Runner Up banners were revealed by Coach Montoya and Coach Wolfrath.

If you ask Coach Wolfrath what he thinks of the future of Shorecrest soccer, he enthusiastically stated, “The sky's the limit! As evidenced by this season, both the boys and girls teams, and collectively the overall Soccer Program at Shorecrest, has a bright future. Those future teams will have some big shoes to fill, but the players that are coming along have the talent - and now the experience as well - to keep the trajectory moving forward. I sense that big, big things will continue to be in store for soccer at Shorecrest.”

Congratulations for a season we will never forget!
Following state championship play, Coach Montoya and Coach Wolfrath reflected on the season.

Coach: Jason Montoya
How long have you coached the varsity team?
This is my third year as Head Coach. 5 years prior was the Assistant Coach to Varsity. A total of 8 years with the Boys Varsity Soccer Chargers.

What has made this year's team so successful?
The commitment and time put in by all players was incredible this year. Our goal this year was to ensure that no opponent outworked us in the field. The sense of team throughout the group was outstanding. We always played for each other and committed ourselves to working as hard as we could for the guys next to us. No doubt about it, the group was a talented one, but when you combine that with a tight knit group, it makes it even harder to beat.

What has been one of your proudest moments this year?
Obviously, winning the first state title is going to rank high up on the list. However, it is amazing to see how our younger kids within our school look up to these young men and want to be like them. The emails from parents stating that a player made an impact in one of their young kids life or that their child is now in the backyard kicking a soccer ball (when they never had before).
Those are moments that go past the game and show what sport can bring to a community.
Did the team face any particular challenges this year or anything they had to overcome?
Our depth was tested this year no doubt. Whether it was due to sickness, injury or suspensions it seemed like we always had to go with a different line-up personnel-wise each game. Guys stepped up, filled in and played outstanding throughout the year and something that could've been looked at as negatives really turned into a positive for us because it created quality depth for us to rely on, which we took advantage of throughout the postseason.

What is your favorite thing about coaching?
Building a sense of community and culture is definitely the thing at the top of my list. Making players proud of the jersey they wear and what it represents. Helping improve technique, giving tactical explanations/demonstrations at training sessions along with match days are always things to look forward to. But nothing beats having the guys on the team creating, developing and embracing the culture within the team and being a part of it.

Please share a little bit about building the soccer program at Shorecrest.
It has been a process and one that really starts in middle school. We emphasize a style of play from middle school that carries into our JV team and ultimately finishes on the Varsity team. The emphasis for us has been to create confidence on the ball and establish dominance in possession. Our entire coaching staff works together in developing themes and topics that will be specific to our principles of play and emphasizing is what I feel ultimately can create success at the Varsity level. We are always looking to create opportunities for players to challenge themselves at the appropriate level and move players up and down accordingly when it makes sense. This way players can see and feel that they are more than a player on a team, they are an important part of our program.

What does the future look like for Shorecrest soccer?
Losing 12 Seniors is difficult for a team, but we have outstanding young talent just waiting for their opportunity to wear the Shorecrest top under the lights. We will continue emphasizing our style of play and our commitment to outworking our opponent . We are confident that Shorecrest soccer will continue to be strong throughout the years to come. We encourage all to come out and be a part of it. Whether it is playing, volunteering or sitting in the stands supporting us. We love it all.

What has made this year's team so successful?
Individually the girls are all really good players and collectively they are a really good team! In particular, the girls were also able to pick up their intensity against tougher opponents. Additionally, the team stepped up their level of play as the season progressed, so that by the time we were in the playoff run we were in top form and playing the best soccer of the season.

What has been one of your proudest moments this year?
I obviously would have to start by saying our run to the first state final in program history and a state runner up finish. This puts us on the map when discussing the top teams in the state. Along the way, we again asserted ourselves as one of the top programs in the region. We won the newly created Gulf Coast Champions Cup (a season long tournament among private schools in Pinellas County). We had a great regular season against a very tough schedule, playing nine different opponents who qualified for regionals. We registered wins against five opponents from larger classifications, and beat East Lake (6A) and CCC (3A) for the first time in the history of the program.

Did the team face any particular challenges this year or anything they had to overcome?
We had a very small roster this year, starting the season with only 14 players. So, all of the girls were called upon to contribute in every game. Each of them had an impact every game this year and were all a big, big part of the success this season.

What is your favorite thing about coaching?
I really enjoy seeing the progress over the course of the season, as well as seeing so much progress with each individual player as the go through their playing career here at Shorecrest. Nearly everyone who plays for the girls varsity team starts in either 8th or 9th grade (and even some start in 7th!), so it really allows the coaching staff to see growth over several years. Additionally, each season it is a new team since players graduate, so it is always fun to see a group come together and become a strong group.

Please share a little bit about building the soccer program at Shorecrest.
Building this into a program was a big goal of mine when I first took the job. There was no history to speak of in terms of playoffs, etc. so it was our goal to first make the regional round and then move on to the bigger stage. In the end it comes down to the players. I have been very fortunate to have had the luxury of coaching so many good players over the years, and I am proud of the job done by everyone associated with the program throughout my 20 years.