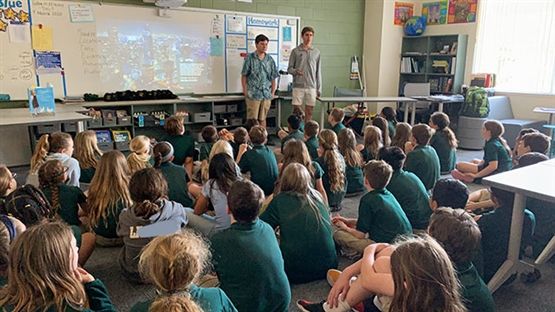 Published on: 3/19/2020
by: Sandy Janack, Fifth Grade Social Studies Teacher
In fifth grade English class, students read “A Night Divided” by Jennifer A. Nielsen, about a family who wakes up one morning separated on either side of the Berlin Wall. Students learned about the challenges this barrier created for families and communities. Through a variety of guest speakers and hands-on, experiential projects, teachers attempted to build understanding and empathy about this time with the students.
In Social Studies, students learned about different types of governments that exist in the world to deepen their understanding of the events in the novel and this time in history.  To further students' understanding, they also learned about the Berlin Airlift, one of the first acts of the Cold War. Students learned about the Allies' division of Germany and Berlin following World War II. The ensuing conflict between the Soviets and the other Allied countries cut West Berlin off from all food, coal, and other essential supplies due to a Soviet blockade.
Students learned about these events through the picture book “Mercedes and the Chocolate Pilot” by Margot Theis Raven, based on the true story of Captain Gail Halvorsen who repeatedly and compassionately dropped candy to the children in West Berlin from his plane to bring some joy during the challenging time. Children began writing letters to the pilot with requests for specific candies and to fly over their neighborhood. He founded "Operation Little Vittles," and dropped candy via miniature parachutes to the city's residents through 1948 and 1949. Years later, he even met up with some of those now-grown children as a celebrated hero. One of those women was Mercedes, about whom the picture book was written.
At the 2020 Pinellas County National History Fair, an Upper School project won 2nd Place in the documentary category. Nico Bottoni ‘21, Jonathan Currie ‘21, Gregory Glasscock ‘21, Zach Hahn ‘21 and Leddon Zwack ‘21 had a ten-minute documentary film entitled “Colonel Gail Halvorsen: Breaking Barriers during the Berlin Airlift.” The team was lucky enough to have a phone interview with Colonel Gail Halvorsen as a first hand resource! To add to the Middle School learning and resources, Jonathan Currie and Gregory Glasscock presented their project to the younger Chargers and shared some of what they had learned.
The Upper School Operation Little Vittles project qualified to move on to the State competition. You can watch the video here. Good luck boys!
Related Tweets:
https://twitter.com/msjanack/status/1225494086251163649
https://twitter.com/msjanack/status/1217123958681718784