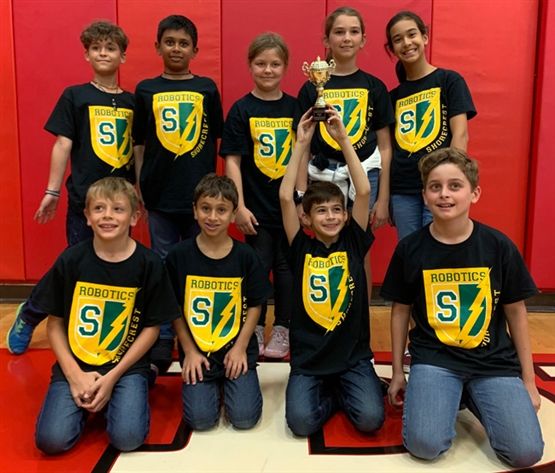 Published on: 11/7/2019
by: Sandra Janack, robotics team faculty sponsor
The fifth grade robotics team, Team Chargers #46599, won best Innovative Solution at the November FIRST LEGO League competition, their first tournament of the season. “They displayed awesome teamwork, energy, and positive attitudes all around! We’re so thankful for the mentorship of Dr. Anna Baralt and Chris Scoby,” said team Coach and fifth grade social studies teacher, Sandy Janack.
Every year, FIRST LEGO League releases a Challenge which is based on a real-world scientific topic. Each Challenge has three parts: the Robot Game, the Innovation Project, and the Core Values. Teams of up to ten children, with at least two adult coaches, participate in the Challenge by programming an autonomous robot to score points on a themed playing field (Robot Game), developing a solution to a problem they have identified (Project), all guided by the FIRST Core Values. Teams may then attend an official tournament.
The theme this year is CITY SHAPER. Teams had to solve a real-world problem in their own community with their Innovation Project. The Innovative Solution award recognizes a team’s solution that is exceptionally well-considered and creative, with good potential to solve the problem researched. Teams that go to events must prepare a 5-minute presentation about their Project.
The students on Team Chargers identified pollution in the local waterways as a “local problem in a public space.” They zeroed in on the mangrove ecosystem in canals and streams that are affected by both solid trash (plastic cups, straws, plastic bags, wrappers, etc.) and fertilizers and pesticides that get into our waterways and affect the mangroves.
Shorecrest eighth grade marine science teacher Kathryn Jeakle took Team Chargers to the Native Classroom on the back of campus to help them identify the problem. They viewed the canal along Shorecrest's property and has a lot of trash in it. They happened to see a "water goat" in the canal which captures solid, floating trash. The team’s idea adapted the goat to include a vertical oyster garden because oysters naturally filter water and filter out pesticides and fertilizers. Often the water goats are attached to trees along the sides of the waterway. The team adapted theirs to use buoys instead so they do not affect tree growth.
In addition to meeting with Mrs. Jeakle, the team also convened with a marine science student from Eckerd College who taught them about mangrove ecosystems.
Team Chargers is now studying microplastics, the microscopic pieces of plastic that are the result of plastics breaking down when left in the water. Mrs. Jeakle helped them collect water samples and they viewed the microplastics through stereoscopes. They plan to continue to innovate and figure out a way to capture some of the microplastics in the waterways near Shorecrest. They are hoping to meet with the inventor of the water goat who lives in St. Petersburg, and also an oyster garden specialist from Tampa Bay Watch before their next competition in December.