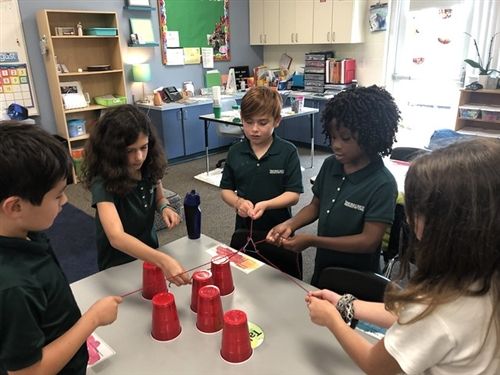 Stack ’em Up: a Third Grade Introduction to Engineering

Published on: 8/22/2019
by: Raffi Darrow, Ebytes Editor
During the first week of school, third graders played Stack ’em Up. The goal of the game is to work as a team to stack cups into a pyramid. The teammates cannot use their hands, rather they are given a rubberband with strings attached to it to use as a tool.

The activity required teamwork, cooperation, creativity and problem solving. Students had to think like engineers and work cooperatively to pull their strings to expand the rubber band, lower the rubber band around a cup, release the string so that the rubber band grabs the cup, and pick up cups to stack them. They also learned that using their teammates' names made giving instructions much easier!

Ask your third grader how well their team worked together, what they might do differently next time, or how this was like the work of an engineer who designs cars, airplanes or cell phones?