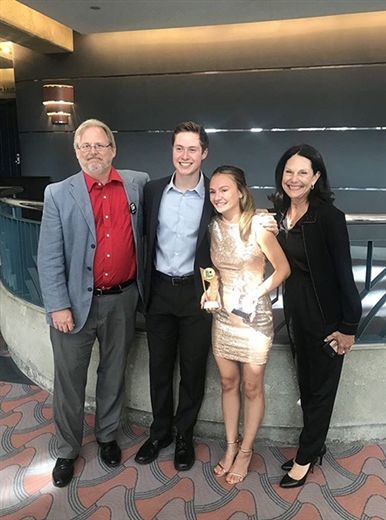 Shorecrest Shines at Broadway Star of the Future Awards

Published on: 6/7/2019
by: Rachel Barrett, Director of Marketing and Communications
The Shorecrest Upper School Performing Arts production of "Rodgers + Hammerstein's Cinderella" was named Outstanding Musical at the 2019 Broadway Star of the Future Awards Showcase on June 2. Its cast and directors took home numerous additional honors, including a Best Actress win for Senna Prasatthong-osoth ‘19 who starred as Cinderella. She will go on to represent the State of Florida at the prestigious Jimmy Awards in New York City later this month.
The Shorecrest thespians performed a medley from their spring musical "Rodgers + Hammerstein's Cinderella" in the Tony Awards®-inspired extravaganza at the Straz Center in Tampa, FL. The Shorecrest production won the top honor among the 43 high school productions from Hillsborough, Pinellas, Pasco and Manatee Counties. A team of theater professionals, college faculty and industry experts reviewed the shows.
Nominees for Outstanding Actor, Outstanding Actress and Outstanding Supporting Performer were invited to participate in the Opening and Closing numbers for the Awards Showcase. From Shorecrest they included Dominic Hoefer (Prince Topher), Senna Prasatthong-osoth (Ella aka Cinderella) and Jordan Tralins (Madame aka the Stepmother).
Senna Prasatthong-osoth ‘19, who starred as Cinderella, was awarded Best Actress and thus chosen to represent Florida at The Jimmy Awards / National High School Musical Theater Awards. Only one boy and one girl in the State receive the honor. Senna was chosen by adjudicators before the ceremonies based on her work in shows, auditions and rehearsals.
Presented by The Broadway League Foundation, The Jimmy Awards are a national celebration of outstanding student achievement, recognizing individual artistry in vocal, dance and acting and elevating the importance of arts education. Senna will work with professional directors and producers and be considered for several recognitions during a life-changing summer in New York City, expenses paid.
Overall Shorecrest received 7 nominations and six awards at the showcase:
Peter Nason of BroadwayWorld.com wrote, “Ms. Prasatthong-osoth of Shorecrest Prep in particular shone as the best Cinderella I've seen with her number, ‘In My Own Little Corner.’ It was filled with zest, wonder, strength and hope - everything we want from this iconic character. … Shorecrest's Cinderella medley, incorporating all grades, was another highlight of the showcase. The vocals, especially from a male quartet at the start, were stupendous. And ‘There Is Music in You’ never sounded better. It was tight, gorgeously staged, sensationally directed, and made me quite sad that I missed what was obviously a stunning production.”
Senna will perform at the eleventh annual Jimmy Awards® ceremony on Monday, June 24 at 7:30pm at the Minskoff Theatre in Manhattan. Featuring dynamic ensemble and solo performances by 86 high school students from 43 regional programs across America (narrowed down from more than 100,000 students at 1,700 high schools.)

Tickets to the ceremony are sold out, but the event will stream live on Facebook.
Senna Prasatthong-osoth is the second performer from Shorecrest to represent Florida at the Jimmy Awards. Alumna Kylie Heyman ‘15 earned the honor in 2015.

About Shorecrest Performing Arts:
Shorecrest thespians are led by choreographer and dance instructor Cheryl Lee and theatre and playwriting instructor Bill Leavengood ‘78. Lee has trained with members of the Royal Ballet and the New York City Ballet and has won national awards for her choreography of tap, lyrical, jazz and musical theatre productions. Leavengood, an alumnus of Shorecrest Preparatory School, is a two-time Eugene O'Neill Award winning playwright. He has several off-Broadway plays to his credit, including Florida Crackers, which was part of Circle Repertory’s 20th Anniversary season.