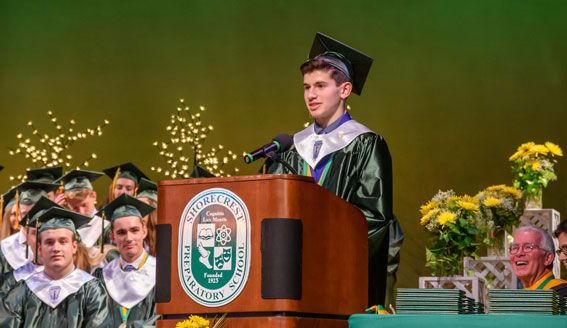 Published on: 5/24/2019
by: Stacy Alexander, Director of Alumni and Community Engagement
On Sunday, May 19, 2019, Shorecrest Preparatory School held its Commencement Ceremony for the 72-member Class of 2019. Among the graduating class was a United States Naval Academy appointee, 7 students recognized by the National Merit Program, 8 NCAA committed student-athletes, a City of St. Petersburg Ambassador to Japan, a People of Distinction Humanitarian Award winner and 4 Eagle Scouts. Collectively the Class of 2019 completed nearly 12,000 service hours over their four years of high school through roles close to home with The Kind Mouse and Guardian ad Litem, nationally through Relay For Life and internationally with mission work in Nicaragua and Nepal.
A packed Janet Root Theatre watched as Trustees, teachers and the Class of 2019 processed to their places on stage. The ceremony began with Salutatorian Karlei Kongsiri, who welcomed guests and borrowed from a popular Jimmy Fallon skit by reading her “Thank you notes” to teachers, administrators, classmates and family.
Karlei shared of her classmates, “When I moved here in eighth grade and looked at the sea of new faces, I tried to picture what it would be like 5 years later when we were graduating together. I hoped that these strangers would become my friends. But what I’ve found is even better. I’ve found a family. Today, I couldn’t picture a more perfect class to be graduating alongside.”
Karlei’s welcome was followed by the Valedictory Address given by Christopher Canizares, who had attended Shorecrest since Alpha. Chris compared navigating Upper School to learning to play a new instrument.
“With the start of Freshmen year, you have no idea what it's going to be like, you’ve just heard things and you kind of like the sound of it. At first, you are not incredibly good at any of the skills necessary and you are super self-conscious of everything you do. On the first day of high school I was a nervous wreck. I walked through the side door [of Landy Hall] because I was too scared to walk through the front doors where all the seniors hung out.
“… Sophomore year eventually comes along. At this point, you’ve learned how to navigate around your musical repertoire, and the skills needed seem a little easier. But most importantly, you’re not a newbie any more, and you make this very clear by with every opportunity you get.
“... Junior year it’s time to really buckle down and get to work. People actually expect you to be fairly decent at what you do, regardless of whether you are or not. And a whole bunch of ‘sheet music’ or ‘responsibility’ comes out of nowhere and hits you like a pile of bricks. The stuff you are learning to play is really hard and frustrating to learn. If there is any point in which you break down and consider quitting, its now; but you’ve come so far, there’s no way you can give it all up. So you just keep playing your music.
“... Second semester senior year comes like the perfect authentic cadence at the end of a song... In truth, life is just like playing an instrument. You cannot pick up the instrument and immediately play well. It takes time and practice. There are going to be missed concerts and mistakes are going to be made. There may even be times when you feel like quitting because with all the practice and effort in the world, things won’t necessarily go perfectly.”
It is a tradition at the Shorecrest Commencement to name an Outstanding Senior. This member of the graduating class returns in ten years to speak at Commencement. Head of Upper School, Don Paige, named Jordan Tralins the Outstanding Senior of the Class of 2019. On Monday, Jordan came back to campus to have a photo taken with the second grade, and said she is excited to speak at the Commencement of the Class of 2029.
A Commencement Address was then given by Gabe Neustadt, the Outstanding Senior of the Shorecrest Class of 2009. After graduating from Harvard, Gabe moved to Los Angeles where he is a screenwriter. Gabe spoke about taking advantage of opportunities that present themselves and how procrastination is an evil that can sometimes provide an interesting outcome. It can serve as the wake-up call you need to get going on an important project or goal. Most importantly, he urged the graduates to display kindness to everyone, especially those who look like they may need a smile or someone to listen to them.
“Seek out people who are lonely. Go to them and try to be their friend, and not because you feel bad for them. Ask them for their advice. Be vulnerable to them. They might teach you things. If all 72 of you do that for someone, there’s a lot of happiness that can be accomplished. It’s a lot of loneliness and suffering that can be abated. Spread the good stuff around.”
The Upper School Vocal Ensemble, with seniors in their caps and gowns and their fellow Upper School students, performed a rendition of "In My Life” by The Beatles.
Headmaster Mike Murphy’s remarks first made note that 29 students from the Class of 2019 are Shorecrest “Lifers,” having been at Shorecrest for 12 years or more. He asked the Lifers to stand up, starting with those who began at Shorecrest in Alpha, followed by JK and Kindergarten.
The Class of 2019 included 10 legacy students, with a family member who attended Shorecrest in the past. Of these legacy students, three had parents who also share the distinction of Lifer. Mr. Murphy coined these special bonds “Double Lifers” and had these students give longevity medals to their parents; Senna Prasatthong-osoth to her father Dan Prasatthong ‘84, Ashton Reynolds to his father Charles Reynolds ‘81 and Jake Freedman to his mother Amy Lettelier ‘88.

The connections for this class are strengthened with more members having relatives who have served on the Board of Trustees or who are faculty members.
Following the first time presentation of longevity medals to the school’s “Double Lifers,” Mr. Murphy officially introduced the Class of 2019, along with many of their accomplishments and accolades from over the years.
Mr. Murphy then awarded diplomas along with Chair of the Board of Trustees, Dennis Leary, while Jeff Ritch ‘01, representing the Alumni Association, presented Alumni pins to each graduate. The final member of the class to receive a diploma was Logan Stenger, who then donned the golden mortarboard, a sign of good luck for the coming year.
The ceremony concluded with remarks from the President of Student Council and lifer, Lily Schneider. Lily hid maps under her classmates’ chairs that noted where to find all of the colleges to which they are headed, and with a lightning bolt marking the place where they all began - Shorecrest. Lily reminisced, “Our class was born in 2000 and 2001, naturally exposing us to change throughout the years to come. We were the first born in the new millennia. As we entered Lower School, Middle School and Upper School, we’ve welcomed a new Head of each division: Dr. Bianco, Ms. Johnson and Mr. Paige. When we finally reached Upper School, we were the first to experience the exciting new schedule and of course, Charger Commons. What we’ve learned through all of this is that change is good. Sometimes change can be hard, sometimes it’s exciting, but above all it’s good... As we head off to college in a few months, let us become excited for what’s ahead and the changes that will lead us to places we’ve always dreamed of.”


The Class of 2019 then gathered on the steps of the Janet Root Theatre for a ceremonial cap toss - gleefully releasing their mortarboards in the air together - for one last moment of bonding and giggles.

Good luck to our newest alumni, the Class of 2019!