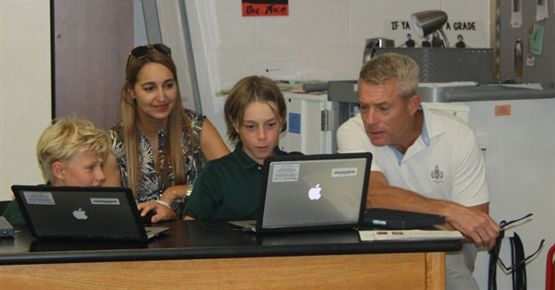 Published on: 5/16/2019
by: Mandy Howell, Fifth Grade Math Teacher
Fifth graders rounded out the school year with their final project using MinecraftEdu to create a colony on Mars. For the fourth year, the teachers and students collaborated on this cross-curricular SMath-ographE (Science + Math + Geography + English) project.
Before presenting the project to the Chargers, Ms. Willis front-loaded the students with information in Science class. First, they learned the basics of astronomy and studied similarities and differences between Earth and Mars. A whiteboard was set up in fifth grade with the question: “Should humans travel to Mars?” Students had a sticky note with their name on the board, and as they learned new information they could move their name between the Yes column and No column to represent their current stance on the topic.
“We learned a lot of the science beforehand, so students could answer questions like: What is Mars like? What are the constraints that we need to worry about if we actually go to Mars? Once they learned about the project, they were able to then transfer that knowledge,” Ms. Willis reported.
To jumpstart their thinking, the sixth grade robotics Team 1449 presented their research to the fifth graders on what it is like to live in space. This year’s theme was Into Orbit, and the LEGO Robotics teams were challenged to learn about humans and long term space exploration. They were able to share information about costs related to space travel, the effects of long term space travel on the human body, as well as current solutions being used on the International Space Station to support astronauts. Fifth graders utilized the goal of NASA’s 2030s Mission to Mars as their framework. Simultaneously in Social Studies class, students discussed what criteria are needed to form a community. These criteria formed the basis for the pod and community goals the fifth graders would create on “Mars.”
Students were broken into small groups to represent scientists in charge of air quality, water, food production, transportation, communication, energy resources, housing and medicine. Each group was tasked with designing a pod for their sector that could withstand Mars’ environment.
An additional community need identified in Social Studies class was sacred spaces. Throughout their research, both fifth and sixth graders noted the need for entertainment as well as social and emotional well-being. Sacred spaces fulfilled this need in the colony. Students learned about the 5 major world religions in Social Studies and created a sacred space pod in their Mars community. They included necessary parts such as a compass determining the direction of Mecca (Islam), a representation of Buddha (Hinduism), and other holy books and objects needed for worship.
Armed with their research, teams planned their pods in 2D on graph paper, with the criteria and constraints given by their Math teacher, Mandy Howell. Like architects, they scaled down their drawings so that it would fit on a rug-sized grid sheet to plan which pod would go where.They discussed relative locations of pods that needed to use each other’s resources, like putting water near food production to help plants grow, and also putting more frequently used pods in the center of the layout so they were easy for everyone to get to. After the relative locations were finalized, students used their Social Studies skills to determine the absolute locations of each pod. They found the coordinates of the cornerstone of each pod by counting blocks North or Sound and East or West, similar to latitude and longitude.
To get the experienced and novice users on the same page in MinecraftEdu, Ms. Janack and Dr. Baralt helped the students complete the MinecraftEdu online tutorial in Social Studies class. Students proved they learned new commands and how to determine which direction their character was pointing by completing the final challenge - their character had to take a selfie with Ms. Janack’s character. One class even took a “groupie!”
Finally the students were on to the main event: building their 3D colony on Mars in MinecraftEdu. They learned very quickly how important precision was in their measurements. The engineering design process was in full swing as they planned, designed, tested and improved their work. They worked hard to meet deadlines so they were sure their buildings were ready for the community showcase.
Students created a final writing piece to show off both their science and math learning as well as their knowledge of nonfiction text features. They used Notability to write about their pods and included two visual representations of their work.
Community members visited on Thursday, May 9, to see the students’ published pieces, take a tour in Minecraft and check out their map blueprints.
The fifth graders are eager to celebrate their hard work with a sleep-over under the space shuttle Atlantis at Kennedy Space Center this week!