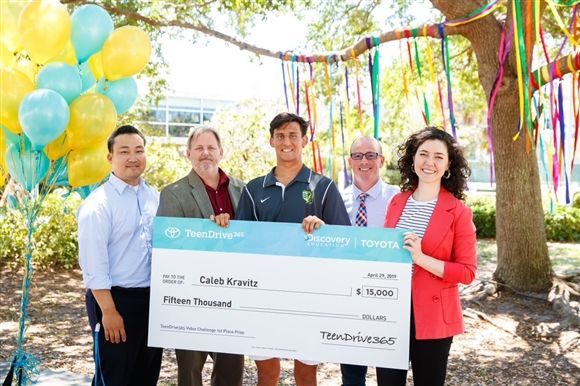 Published on: 5/2/2019
by: Stacy Alexander, Director of Alumni and Community Engagement
During an Upper School assembly on Monday, Caleb Kravitz ‘20 discovered he is the Grand Prize Winner of Toyota’s TeenDrive365 Video Challenge! Representatives from Discovery Education surprised Caleb with the announcement and the presentation of a large $15,000 check. Along with the prize money, Caleb will have the chance to work with a Discovery Education film crew to reshoot his winning video as a TV-ready PSA.
The TeenDrive365 Video Challenge asked students in grades 9-12 to create 30-60 second PSA videos to inspire their peers to drive more safely and avoid risky behavior.
As the eighth annual Toyota TeenDrive365 Video Challenge winner, Caleb’s “Don’t Recline Behind the Wheel” video was selected out of more than a thousand submissions by a panel of judges at Toyota and Discovery Education.
Driving while distracted can make it difficult to react during a potential crash, especially for teen drivers. Caleb used the video to give an important message to his friends. “For teens who use their phones while driving, it can wait. No text is worth your life,” he said.
The Shorecrest Upper School curriculum is supportive of creativity through a variety of visual arts classes ranging from intro level through AP, among them digital filmmaking. Bill Leavengood ‘78 and Richard Rho are Caleb’s teachers for this class for the second year. Like in many of our courses throughout the school, Shorecrest creates authentic opportunities for our students to be able measure themselves against other students around the state and nationally to help them gauge their own learning and progress.
About Caleb’s contest entry, Leavengood said, “Caleb is a clever, skillful and self-motivated young filmmaker who always sets out to achieve at a higher level than the class assignment requires.”
Rho added “Caleb's video communicates a very important message about the importance of safety for the generation of new drivers and how something inconsequential like texting can have serious and sometimes grave consequences.” Rho noted, “Caleb conveys that message in an entertaining and relatable way that resonates with his peers.  He did a great job imagining the concept and putting his idea into action.”
Congratulations Caleb!
About TeenDrive365:
TeenDrive365 is a comprehensive program designed by Toyota and Discovery Education to help teens avoid distractions and stay safe behind the wheel. The initiative offers a range of content, tools and resources designed specifically for educators and teens. The program aims to help guide teens through those critical first years behind the wheel, as well as a develop a lifetime of safe driving habits.
Photo Copyright Associated Press.