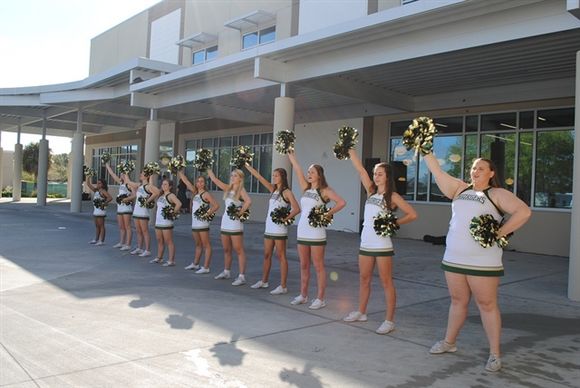 Published on: 3/8/2019
by: Stacy Alexander, Director of Alumni and Community Engagement
On the morning of Thursday, February 28, 2019, the full Shorecrest community gathered to celebrate a major milestone in the Transform Campaign. Almost one year to the day of the campaign's public launch, the school community celebrated the opening of the first floor of the new 60,000 square foot facility and the building's new name - Charger Commons.

“Today really is a monumental day for Shorecrest and our community,” said Mike Murphy, Shorecrest Headmaster. “Today marks the beginning of an era. This facility provides a place to meet and eat together, fostering multi-generational relationships among Shorecrest students.”
The first floor of Charger Commons features two dining rooms - the school's first ever - where students of all ages can enjoy healthy meals and special events. “Charger Commons will be to this campus what a student union is to most colleges or universities,” said Murphy.
In addition to the dining rooms, the first floor of Charger Commons houses a new library/media center, clinic, dedicated space for The Wonder Studio parent-toddler programs, and state-of-the-art classrooms and playgrounds for The Experiential School of Tampa Bay, the 3, 4, and 5-year-old program at Shorecrest.
“This new facility and the reimagined lower campus was necessary to align with Shorecrest’s 2020 Vision & Strategic Plan. We needed to transform the campus and enhance the experience for Shorecrest students, faculty and families,” Murphy said. “As we work to achieve this vision, we are genuinely humbled by the incredible generosity of all those who have championed our dream and mission.”
The celebration also launched the “Rise” phase of the Transform Campaign, the school's most ambitious capital campaign to date. With a goal of $16 million, the Transform Campaign has benefitted from nearly $10 million in contributions, closing out phase one. The Rise phase will help finish out the second floor of the new facility to include Lower School art, music and languages, provide a space for The Learning Center and the Shorecrest Community Association (SCA), and will cultivate 1.5 acres of greenspace.
“We are immensely grateful for all of those supporters who have already made an impactful gift to the Transform Campaign,” said Shorecrest Director of Advancement, Michael Gillis. “We have the chance to do something special for the current and future children and families of this community. There is still much to be done to meet our $16 million goal. Our community’s generosity and desire to provide the best possible education for our students is what fuels our continued transformation.”
As a nod to the Transform Campaign's 2018 launch, audiences enjoyed special appearances by recurring characters - the Transform Butterfly and Transformer Optimus Prime. The morning event also offered symbols of the innovation that the new facility will allow. As the audience of 1,000+ community members cheered, a drone piloted by Shorecrest parent Chris Rafter, Shorecrest faculty Richard Rho, and Upper School students began to lift letters up into the sky unveiling the word RISE, signaling the launch of campaign phase two.
The event closed with a meaningful tribute to Headmaster Mike Murphy, who recently announced his plans to retire from Shorecrest at the end of the 2019-2020 school year. Transform’s earliest donors, Tom Andrews and Jennifer Vesper, and the Sher and Conroy families, took the mic to reveal their collective decision to honor Headmaster Mike Murphy as the namesake of the section of the building that houses The Experiential School of Tampa Bay. Providing a state-of-the art space for the youngest of the Shorecrest community has long been a major initiative for Mr. Murphy.
“As longtime supporters of Shorecrest, we were excited to provide a philanthropic gift to the Transform Campaign that would not only complement the excellent faculty we have, but provide the physical plant that would enhance our students’ experience,” said Tom Andrews, former Chair of the Shorecrest Board of Trustees and first major supporter of the campaign. “It was important to my family and to the Sher and Conroy families that Mr. Murphy’s commitment and dedication to the growth and success of Shorecrest was acknowledged. We were honored to be able to provide this naming opportunity.”
While a surprised Mike Murphy and Shorecrest community looked on, a banner descended revealing a new sign - the Mike Murphy Experiential School. Cheers and applause filled the crowd as bubbles started floating upward. The youngest Chargers especially enjoyed the festive atmosphere.
Following the program, Upper School Student Ambassadors led students and visitors on a tour of the new facility. The Class of 2019 were the first to get a glimpse inside the newly completed first-floor, followed by groups of students from various grades.
Overhead among the student body - "More amazing than I ever imagined!” “Is all THAT really for us?” “I want do Transforming again!”

Eager students with smiling faces filled the Charger Commons with a feeling of camaraderie and community knowing that they would be enjoying the new building daily starting March 18, after returning from Spring Break.
To learn more about Transform or to request a tour of the facility, visit www.TransformShorecrest.org.
View a video of the day here:
Thank you to Shorecrest Alumni Beth Reynolds ‘84 and Elliott Darrow ‘16 for photographing the event. Capturing students, faculty, staff, Trustees and more at such an important milestone will help Chargers make lasting memories!
View photos from the event here.